Ann Tuveson Richardson passed away peacefully Monday, May 16, 2016, surrounded by her children in Phoenix.

Ann, daughter of Phoebe and Glen James, grew up in Morrison, Illinois, where she acted in high school plays, was a cheerleader and played the saxophone in the school band.

Ann met Robert Tuveson in Minneapolis while attending McConnel Airline School, where she was voted “best legs.” They married, moved to Albert Lea and had four children. The couple divorced 20 years later. Ann moved to Phoenix, where she worked at Honeywell and received her associate’s degree. 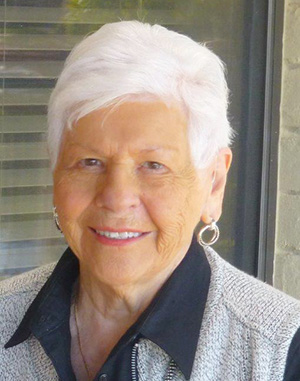 In 1991 Ann attended her 45th high school class reunion, where she reconnected with her high school sweetheart, Omer Richardson. They married four months later and she joined him in St. Charles, Illinois.  After Omer’s 2003 death, Ann moved to Westbrook Village in Peoria, Arizona, just a few miles from daughter, Gayle.

Ann was an active Willowbrook Methodist Church member, excellent bridge player, the best cookie maker and her style sense was evidenced by her beautiful home. She was a very caring and fabulous mother, grandmother and great-grandmother.

A celebration of her life will take place June 11 in Morrison.