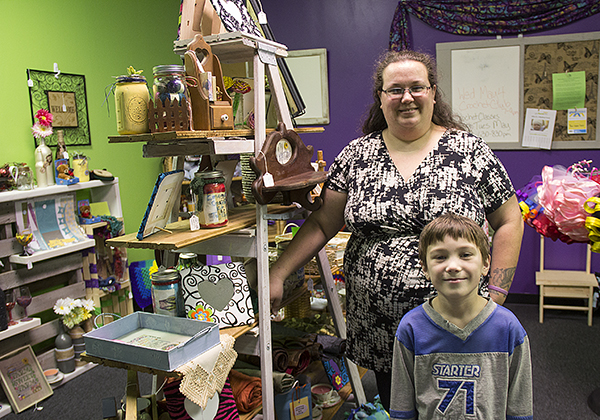 An area woman has expanded her love of crafting into a new store at Skyline Plaza.

Though Mindy Christenson had taken part in craft shows and filled special orders for the last 2 1/2 years, she decided to take her endeavors a step further when she  opened Mama’s Gift Corner on March 1.

She said it has been a dream come true.

“My friends have told me I’m absolutely glowing because I love what I do,” she said. 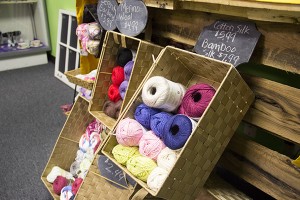 Mama’s Gift Corner is in the former location of Johnson Physical Therapy. It includes everything from crocheted and embroidered items, to handmade soaps, specialty yarn, home decor and yard decorations.

In addition to her creations, she has the work of 21 other consigners also for sale in the store. She said there are no two vendors in the store that have the same product, and each item has a personal touch on it.

Christenson said the store offers gifts ranging in price from $2.50 all the way up to $200.

She hopes to get the word out to people in the community that the business is open, particularly with Mother’s Day approaching.

Some of the new projects she has been working on are requests for weighted lap blankets for children with autism and figit blankets for people with Alzheimer’s disease or dementia.

She said if people want to request items, they should not hestitate to do so. If she can’t make it, she can find someone who can.

Mama’s Gift Corner also  offers classes on everything from crocheting to wine glass decorating, scrapbooking, stamping and embroidery. Christenson said she does not charge a fee for people who want to put on a class because she likes seeing people craft.

Christenson, who has crocheted for 25 years and knitted for six years, said she always has at least three or four projects going at any given time.

She and her husband, Scott, have three children, Raine, Saxon and Kyden.

Saxon and Kyden both have cystic fibrosis, and to avoid them getting ill more frequently, she homeschools the boys.

She does the homeschooling throughout the day, so the boys are often in the store. There is a separate room in the back where they can play and another area with a table that they can work on their schooling.

She said her older son, Saxon, has been learning a lot through the business, including counting money and social skills such as interacting with people.

She said when Saxon was 1 1/2 years old, she left her full-time job to become a stay-at-home mom, and up until March, that is what she had been doing. 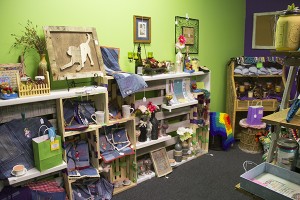 In addition to her own crafts, Christenson sells the work of a couple dozen other crafters at her new store. – Sarah Stultz/Albert Lea Tribune

She said though it has been a challenge having two children with cystic fibrosis, she is grateful that it led to her current opportunity with the business.

“That’s the silver lining of the boys being sick,” she said. “I got my dream job.”