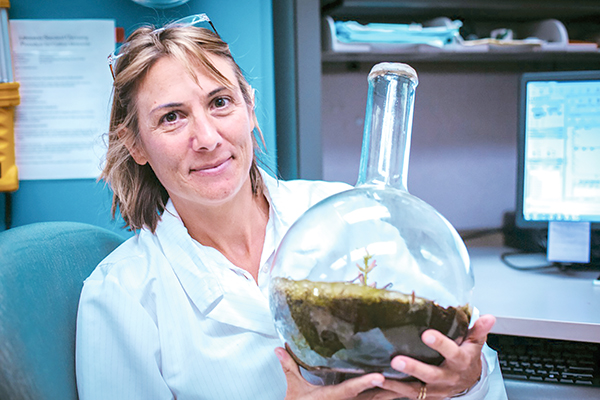 Austin native Hope Jahren has been recognized as one of Time Magazine’s 100 Most Influential People. – Photo courtesy Matt Ching

AUSTIN — One scientist’s aspirations from her dad have taken her to new heights in the field of science.

Her name is Hope Jahren, though folks in Austin might know her as Anne Jahren, a girl who loved hanging out in her father’s then-Austin Community College science lab.

“I really loved it out there, ever since I was a little kid in his lab where he taught demonstrations for physics,” Jahren said. “I just loved being out there with him and always wanted to have my own lab because of that.”

Now all grown up, Jahren has her own lab at the University of Hawaii at Manoa where she teaches biology and geology and is a tenured professor of geology and geophysics.

And she’s recently been named to Time Magazine’s list of 100 Most Influential People for her role in the science field and for a book about the challenges of being a female scientist.

Jahren said her dad had a huge impact on her career path and she “wanted to be like my dad.”

“My dad used to let us play with the equipment when we were little and I still feel like that,” Jahren said. “I like being in the lab (with) the machines. It’s fun.”

She wanted to teach her students the way her dad showed her.

“People would say around town, ‘You were my physics teacher.’ People liked him, (and) he liked his students and his job,” Jahren said. “I want(ed) to grow up and be like that.”

Science runs in the family, as her parents and three older brothers also studied science at the University of Minnesota.

After completing her undergraduate degree at U of M, she was a graduate student at University of California, Berkeley where she studied and taught soil science in agriculture.

She soon had jobs as a professor in Georgia, Maryland and currently Hawaii, but says she hopes to move back to Minnesota soon for the right job.

In her realm of the science field, Jahren says she is still very much interested in agriculture.

“There’s still a lot of people in the world that don’t have enough to eat,” Jahren said. “And even in countries where there is enough to eat, nutrition isn’t always very good, so I’m interested in the future of farming for that reason.”

The memoir touches on childhood, work experiences and finding a best friend in her lab mate Bill, who she’s worked with for 25 years. It also includes learning about plants.

She describes her friend Bill as a solid, hardworking guy and wanted to highlight him in the book.

“There’s a lot of hardworking people in every field that you don’t hear about,” Jahren said.

Bill is also a professor at the University of Hawaii Manoa.

Her book also touches on a few problems in the science field, such as some harassment women scientists face.

Jahren hopes her book will allow people to see similarities between their own lives and the lives of scientists.

“That they’ll be proud of the scientists in America because we work hard and we really care about what we’re doing,” Jahren said.

She also started going by her middle name, Hope, after her first job’s boss asked it of her. When she started at the job, someone was already named Anne, and her boss “was very business-like,” so she went by Hope.

“Lab Girl” has been named a New York Times best-seller. Her book is available on Amazon.

When she first heard about being named one of Time’s Most Influential People, Jahren was surprised and “very worried I didn’t deserve it.”

“But then I decided to stop worrying and think about how I can try to turn this into something good … and help strengthen the field of science and America,” Jahren said.

She said she is grateful for being named to the list and said she’s glad she grew up Austin.

“I have friends that knew me from a little kid and that I grew up with … and they know the real me,” Jahren said. “Now that I moved around, I realize that not everyone has that, and I’m lucky.”

She adds she is proud of Austin for taking pride in their schools, especially the science programs and she’s proud of her friends who became teachers.

Jahren currently resides in Hawaii with her husband, son and dog.