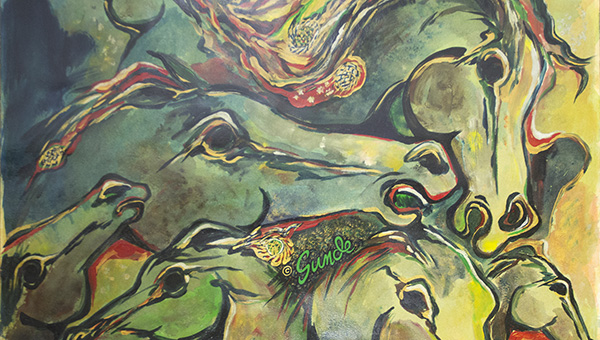 A large collection of original art from a former Albert Lea resident who died in 2014 will be on display and for sale starting Saturday at Northbridge Mall.

Merna Sunde, who left her work to The Albert Lea Art Center, created a variety of art during her life, ranging from bright and colorful abstract pieces to realism.

Because of the large number of pieces in the collection, 25 pieces will be preserved and displayed at later dates as part of the Art Center’s permanent collection, and the balance will be sold at the sale, which runs through May 28. 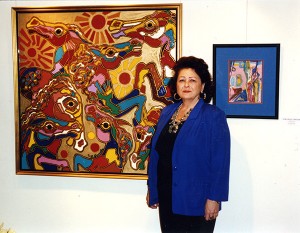 Merna Sunde stands next to some of her artwork during a show at The Albert Lea Center in the 1990s. – Provided

The collection ranges from work Sunde did as an art student at Mankato State University to work done in her later years, ranging from simple abstracts to complex, large-scale paintings with different mediums. Horses played a major role in her art, explaining her interest in them when she was younger, as well as geometric forms representing humans, animals, architecture and nature, according to a news release.

Bev Jackson Cotter, chairwoman of the Sunde Collection Committee, said only about one-third of the artist’s paintings were named.

“We’re really excited to see how the public responds,” Cotter said, noting that much of the information about Sunde’s life is unknown, leaving a sense of mystery. “We would love to know what she was thinking.”

Art Center member Grace Skaar said she found it interesting that Sunde had a different way of signing each of her paintings, both in style and location on the pieces.

She was born in Forest City, Iowa, graduated high school in Kiester, and after graduating from Mankato State University, taught art in Wells, before marrying and moving to California. After retiring, she moved to Albert Lea. She was featured in shows at the Art Center in 1991 and 1994.

In a Tribune article from April 1991, Sunde described her work. 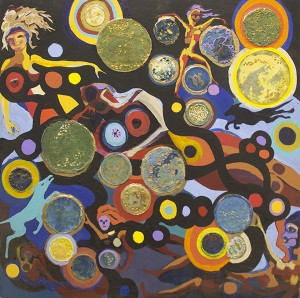 Artist Merna Sunde created this piece with multiple mediums, including what appears to be a few paint cans. This and other work by Sunde will be for sale May 21 to 28 at Northbridge Mall. Sarah Stultz/Albert Lea Tribune

“I have an excellent memory,” she said. “Everything is stored up here. All the colors and all the feelings I’ve had about different things in my life. You create from your own life experience, and people see it from their own life experience, and it becomes many different paintings. All of my work has something of me in it, and then other people can maybe find something of themselves in it, too.”

Albert Lea resident Eloise Adams said she met Sunde shortly after she moved to Albert Lea and had a show at the Art Center. Their friendship grew over the years.

“We became friends because we were both artists, but I wasn’t anywhere near the artist Merna was,” Adams said. “She was just phenomenal. She was a brilliant lady.”

“She had a great imagination,” Adams said. “She had such a good sense for style and design.”

She said Sunde’s sense of style and design carried over into her own home, as much of her home was renovated. She even had a tower of sorts built where she could go and write poetry.

Sunde’s artwork will be sold for various prices, ranging from $10 to $1,500. Some of the work is framed and some is unframed.

If people have questions, they can contact the Art Center at 373-5665.

What: Merna Sunde exhibition and sale