Memorial services for Dale L. Rippey of Albert Lea will be at 2 p.m. Saturday at

Bridge Community Church North, 2016 Bridge Ave. in Albert Lea. The Rev. Clayton Balsley will officiate. Interment will be in Hillcrest Cemetery. Military Honors will be accorded by Albert Lea Veteran’s Organizations. Friends may visit with family one hour before services at the church. Bonnerup Funeral Service is assisting the family.

Dale died unexpectedly on Sunday, May 1, 2016, at Thorne Crest Senior Living Community. He was 88. 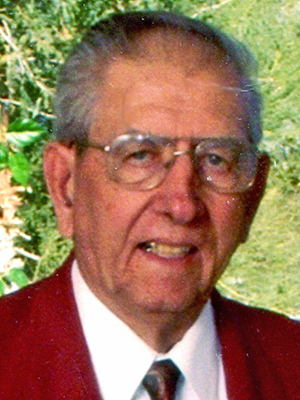 He was born on Nov. 1, 1927, in Mondamin, Iowa, the son of Lee S. and Lena J. (Heintz) Rippey. His family lived on a farm near Mondamin and later moved to St. Joseph, Missouri where he graduated from Benton High School. He was united in marriage to his soul mate, Darlyne Martin on May 18, 1946, in Atchison, Kansas.

During World War II, Dale served with the United States Army Air Corps as an air traffic controller in Panama. After his military service he farmed in Missouri and then moved to Omaha where he worked 12 years with a construction company. He left the construction business to become involved in full time Christian service.

He served at Maplecrest American Baptist Home in Omaha for two years and then in 1975 was transferred to Thorne Crest Senior Living Community in Albert Lea, where he served for 18 years before retiring. During his years at Thorne Crest he supervised several remodeling projects and the addition of the assisted living wing. He was a member of Calvary Baptist Church where he served as a lay leader, deacon, trustee and as the moderator of both the local congregation and Area Five (southern Minnesota and northern Iowa). Dale contributed in many ways in the communities where he lived. While in Albert Lea he had been active in rotary, Masonic Lodge, library board, Hillcrest Cemetery Board and the United Way, to name a few. For several years, Dale and Darlyne had volunteered their time at Rainbow Acres, a ranch for adults with developmental disabilities, in Camp Verde, Arizona, and they participated on a mission trip to Haiti. Dale enjoyed fishing, spending time at the summer cottage, woodworking, playing cards and traveling.

The quote “Allow your passion to become your purpose, and it will one day become your profession” is a true reflection of Dale’s life. He was truly hands on and lived his life caring about those whose lives he touched.