Funeral services for Donald L. Smith of New Richland will be at 2 p.m. Wednesday at Congregational Church in New Richland. The Rev. Pamela Jensen will officiate. Visitation will be from noon until the time of the service. Interment will be in St. Peter’s Cemetery in New Richland. Military honors will be accorded by the New Richland American Legion. 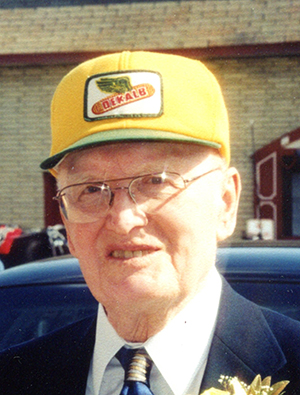 Donald was born April 30, 1920, in New Richland, the son of Harry and Amanda (Jeddeloh) Smith.He graduated from New Richland High School in 1938 and attended the University of Minnesota. Don served his country in the United States Army and upon discharge returned to New Richland. On June 8, 1952, he was united in marriage to Audreene Olson at Cross of Glory Lutheran Church in Hartland.

Don was a very active member of the Congregational Church serving as a trustee, deacon, singing in the choir and a member of the couples club. He farmed in the New Richland area for many years and was a second generation rural letter carrier.

He was preceded in death by his parents; brothers Richard, Dale and Thomas Smith; sister, Harriet Wahlstrom; and son-in -law, Aloysius Towle.