Fighting for those who serve in the military

As a member of the House Armed Services Committee, I have the responsibility, along with my colleagues, to craft the National Defense Authorization Act every year. The NDAA is an annual bill voted on by Congress that authorizes funding for the Department of Defense, spanning all branches of the U.S. military.

Having served 24 years in the Army National Guard, I know firsthand that the single greatest resource our military has is the brave men and women who wear our uniform. This year, as we worked on this legislation, my focus remained on ensuring that our service members had the tools they need to get the job done and we keep the promises we made to them. This year, I was proud to fight for several provisions that were included in the bill that passed the House of Representatives two weeks ago.

As the highest-ranking enlisted soldier ever to serve in Congress, I know that maintaining strength and readiness in our armed services is one vital tool to the security of our national defense. That’s why I was proud to join my good friend Rep. Christopher Gibson, R-New York, to introduce the Protecting Our Security Through Utilizing Right-Sized End-Strength (POSTURE) Act of 2016. It pauses the drawdown of our Army and Marine Corps and provides these branches with the appropriate amount of resources they need to get the job done. 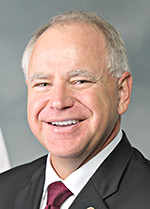 We also fought for a provision to require TRICARE — the health care program for military personnel and their families — to comply with the Paul Wellstone Mental Health Parity and Addiction Equity Act of 2008, which will mandate that services addressing behavioral health and substance use disorders be treated equally to coverage for traditional medical and surgical care. At the moment, TRICARE does not cover certain treatments that have been proven to make a positive difference in the lives of Americans suffering with these illnesses. By ensuring this provision becomes law, there will be fewer barriers standing between our warriors and the care they need.

We also included provisions that increase servicemembers access to important safety training, empowers the National Guard to continue their significant contribution to our Armed Forces, continues diplomatic partnerships with the State Department and works to protect the pay and retirement benefits our soldier have been promised.

While no legislation is perfect, I am pleased with the progress we achieved. Our nation’s military must be a reflection of our values. The best way to achieve peace and stability is to invest in the men and women who wear our uniform with honor and protect the promises we have made to them.