NORTHWOOD — The former mayor of Northwood has filed a written plea of guilty to two fraud-related felonies.

Randy Severson, 52, was charged with two counts of first-degree fraudulent practice committed against a city bank while he was president of a now-closed lumber business. 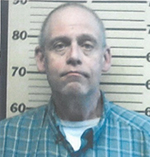 He has a formal plea change hearing June 20 in Worth County District Court for the charges, Class C felonies punishable by up to 10 years in prison on each count.

Severson was accused of fraudulently using the names of customers, family members and others on invoices he submitted to Northwood State Bank for lines of credit.