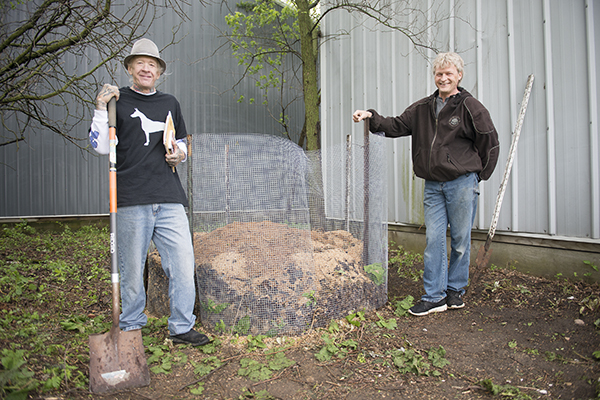 Two local men are on a mission to educate pet owners and help the environment at the same time.

Mike Haskins has started Code Brown, a dog waste removal service with the mission to “educate and guide pet owners in the safe and responsible composting and upcycling of their dogs’ waste.” Haskins and his friend Del Schroader brainstormed the idea after Haskins saw how much dog waste was building up at a dog park he frequented, and after Schroader had received multiple customer inquiries about such a service at his petsitting business Staycation Pet Care. Haskins himself said he used to be guilty of throwing away his dog’s waste in plastic bags, but said that it never felt right to him.

“I wasn’t breaking any rules, but I still felt guilty,” he said.

After reading the book “The Pet Poo Pocket Guide” by Rose Seemann, the two realized how much dog waste and how it’s disposed of can impact the environment. Haskins said far too much dog waste ends up in landfills, usually in plastic grocery bags. Schroader said dog waste is the third leading contributor to groundwater pollution.

Haskins offers the service of stopping by a dog owner’s home once or twice a week — or whatever works best for the customer — and picking up the dog waste. From there he takes the waste to Schroader’s Albert Lea property to start the composting process. The waste is mixed with leaves or other carbon fiber-providing natural properties, and then covered with sawdust. The sawdust cancels out any foul-smelling odors, and keeps the compost pile from attracting rodents or bugs, as do the carbon elements. Occasionally the pile is turned to keep the composting process going. Once outside temperatures reach below 40 degrees, the process stops. The two said more could be added to the pile during that time, and the mixture can be mixed with water and can start composting again once temperatures reach back up to 40 degrees and above. Once a bin has been filled, it will need to be cured for six months to one year before it can be used to fertilize. The composting done at Staycation Pet Care will be cured for one year, and Haskins and Schroader keep records of temperatures, schedules and other numbers having to do with the process.

The dog waste that Code Brown will compost on the Staycation Pet Care property will fertilize the grounds of the pet-sitting business. Schroader noted the compost fertilizer should not be used on any edible plants or crops, as there are no long-term studies available yet on using the mixture on edible plants. For now it is solely used on ornamental plants or in landscaping around Schroader’s property.

Haskins said his business is a form of upcycling, as it takes the waste and makes it more valuable in that it can go back to nature.

“It pays back with dividends,” he said.

Schroader said Haskins’ business venture differs from most other local dog waste removal services in that he will compost the waste, instead of taking it to the landfill like some others do.

The two men are on a mission to get more and more pet owners to dispose of their pet waste responsibly, especially as a new dog park comes to the area. Eventually the pair hopes that ordinances come into place on a city or county-wide level for the waste disposal, something they believe will take some time, but hope will come about by communities following through.

“We don’t want to be the only ones composting. We want everyone to compost,” Schroader said. “If everyone did it, that’d be awesome.”

Interesting fact: Haskins and Schroader grew up together and have been friends since they were children