Not guilty plea in 120 mph chase

A Minneapolis man who reportedly led a Minnesota State Patrol trooper on a chase at speeds of more than 120 mph earlier this month in Freeborn County pleaded not guilty Thursday to fleeing a peace officer in a motor vehicle. 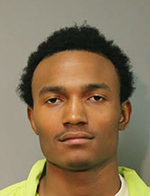 According to court documents, a trooper received a complaint shortly after 4:30 p.m. May 14 on a report that a Nissan Altima was speeding, crossing over fog lines and centerlines, and passing semis on the righthand shoulder one mile north of the Minnesota and Iowa border on Interstate 35.

Court documents state the trooper was traveling 124 mph and the vehicle was still pulling away.

The chase reportedly continued north of Ellendale before the vehicle reportedly struck stop sticks one mile north of the Hope exit.

Simms was reportedly later identified. He reportedly said he had fled because he knew his license had been suspended and he had no insurance for the vehicle. He had reportedly been trying to get as close as possible to the Twin Cities.

A settlement conference is scheduled for Aug. 10 and a jury trial Oct. 25, if the case has not been settled by that point.