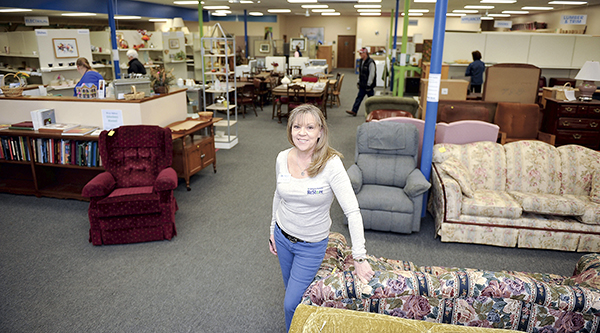 ReStore manager Lynn Nuckolls stands at the front of the ReStore which takes in items from the community and sells them at reduced prices. – Eric Johnson/Albert Lea Tribune

AUSTIN — Habitat for Humanity ReStores can be a hidden gem for people looking to make do-it-yourself projects or looking for that one piece of furniture to complete a room.

The Freeborn/Mower County ReStore moved in December 2014 to the Sterling Shopping Center, which increased the number and variety of donations it receives.

“We were in a warehouse (by Packer Arena), we didn’t have a lot of those things,” ReStore manager Lynn Nuckolls said. “Now we’re in a part of town where a lot of people know about us.”

ReStore had its start when Habitat for Humanity would receive a lot of gifts in kind, such as manufacturers donating unwanted doors as well as doors or other excess materials donated by people, so they started selling them, Nuckolls said.

Once Habitat for Humanity saw it was becoming a trend, they decided to brand it with the ReStore name and start a support group for other stores.

The support group is the “brain power” finding out which methods work best and then relaying them to the other stores. Individual stores send in reports on how they’re doing, and the support group compiles them together and then guides the stores through the best ways to market. They even have ready-made templates so all stores need to do is insert their name and location.

“Any question you have, they’ll find an answer,” Nuckolls said.

Everything in the ReStore is donated and generally comes in gently used or new condition. “Everything” can be defined as furniture, such as couches, chairs and dining tables, household goods and accessories like decorations or plates, building materials, appliances and most items in between.

“Every ReStore is very different because every ReStore sells what’s donated to them,” Nuckolls said. “You go to one ReStore and it’s nothing but building supplies. We’ve learned from year to year what people are going to buy and what they aren’t going to buy. ”

The most unique item donated to them was a World War II-era black out candle used in England during the Blitzkrieg.

Nuckolls said they try their hardest not to throw anything away unless absolutely necessary, meaning it’s either broken and can’t be fixed or isn’t selling.

“We have stuff out there that’s been free, but no one has bought it, so we have to throw it away and we hate that,” Nuckolls said. “If we can’t sell it, we have no alternative because our floor space is very valuable to us.”

For the DIY-er, people are using cabinet doors, wood trim and wooden furniture for refinishing, painting projects and glassware for bird feeders.

The most unique project Nuckolls has seen is an old brass chandelier repurposed with solar in mind. The buyer replaced the wiring and bulbs with solar lights and displayed it in their garden.

Another popular project is putting chalkboards in cabinet doors, like the one hanging in Nuckoll’s office.

“Everything in the store you could use,” Nuckolls said.

What the ReStore has more than the big box marts are reduced prices, Nuckolls said.

“We typically try to price things at about 30 to 50 percent of what they’re worth in another market,” she said. “If I have an appliance, sometimes I’ll go to sears and see what their price is on something.”

It also depends on quality of the donated item. If it’s a bit rusty, Nuckolls says she’ll more than 30 percent off, but if it’s exceptional or antique, the price will be a little bit less than 30 percent.

Not only do ReStores sell products to customers at lower rates, they also support Habitat for Humanity’s mission to build homes. Before a family officially owns a home, they must put in 500 hours of sweat equity to help build the house.

Nuckolls said the store relies on a tremendous force of volunteers and is in need of more. They currently have at least six people who are at the store every week.

“If we could get 10 to 20 volunteers that will work one day a week for four hours…that is what we need,” Nuckolls said. “If you’ve got a talent, I can probably use it here.”

Nuckolls said they mostly just clean the item up and sell it in as-is condition, but there are a few volunteers who get items ready to be displayed and sold.

One of their volunteers, Smoky, salvages the items they received.

Another volunteer is a master electrician who tests everything before it goes on the sales floor. If he can fix it without spending too much money on it, then it gets fixed and made readied to be sold.

They also have a volunteer who is terrific with woodworking and can fix things such as a broken table leg before it gets sold.

Volunteers help with pick-ups, run the register, pricing, moving items and much more.

Tuesday through Saturday, 10 to 4 p.m. Ring the doorbell in the back and somebody will help you get things out of your car.

Applications for volunteers are available at the store or online at www.habitatfreebornmower.org/volunteer. 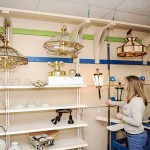 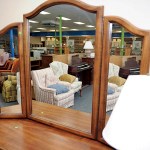 A mirror on a dresser reflects what the ReStore has to offer in its showroom. – Eric Johnson/Albert Lea Tribune 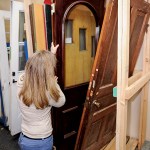 Lynn Nuckolls, ReStore manager, shows off a door she was excited to sell. It’s one of the store’s hidden gems. – Eric Johnson/Albert Lea Tribune 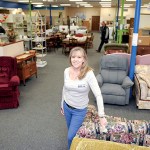 ReStore manager Lynn Nuckolls stands at the front of the ReStore which takes in items from the community and sells them at reduced prices. – Eric Johnson/Albert Lea Tribune