The family moved from Conger to a farm near Alden in 1927. Harold attended 12 years at Alden School with graduation from Alden High School in 1941. Shortly after high school, Harold had lung surgery at Mayo Clinic, where the lower two lobes on his right lung were removed — a very experimental surgery at that time. Recovering from surgery, he was employed by the Mayo Clinic for several months before returning to the farm. For health reasons, he spent the winters in Texas and Arizona for several years during his 20s, returning summers to help with the farm.

On Nov. 23, 1952, Harold was united in marriage to Shirley Yocom at Emmons Lutheran Church. Living in Alden, Harold belonged to Danish Church when it merged with Redeemer Lutheran and served on the church council. Harold farmed with brother, Roger, and father, Oscar, with dairy herd and hogs, and was especially active with the dairy part of the operation, serving on the Alden Creamery Board. While Roger handled most of the farm work and chores, Harold managed Reindal Farm Services selling fertilizer, lime and seed. 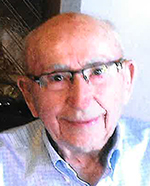 Harold and Shirley moved to California in 1974 with the climate near the ocean better for Harold’s health. His hobbies included woodworking, including making cabinets for family. He enjoyed traveling with Shirley to Alaska, Europe and Australia. In recent years they belonged to the Sons of Norway in San Clemente and San Clemente Presbyterian Church, singing in the choir for several years.

Memorial services are pending this summer in San Clemente and Minnesota.