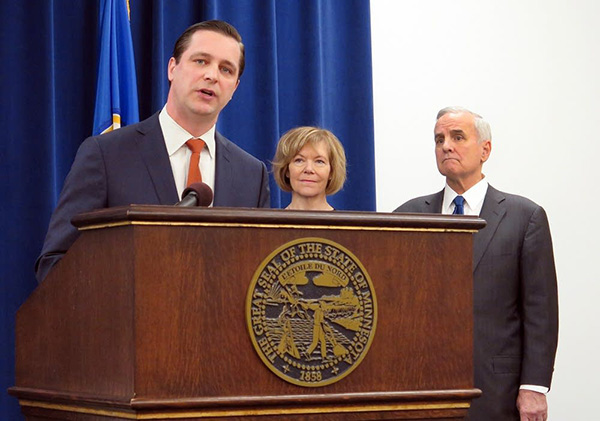 Met Council Chairman Adam Duininck, at the lectern, said there could be problems if the Legislature doesn’t approve the last piece of funding for the Southwest light rail line. – Tom Scheck/MPR News file

State lawmakers will soon decide whether the Southwest Corridor light rail project remains on track as they negotiate a larger transportation funding bill in the closing days of the 2016 session.

Transit has been a big sticking point in those negotiations, which were left unresolved a year ago. House Republicans have recently softened their opposition to transit, although they are not yet ready to put that in writing.

There’s a lot at stake for transit. For Southwest light rail in particular, there’s nearly $900 million in Federal Transit Administration funding on the line. The $1.8 billion project would connect Eden Prairie and downtown Minneapolis starting in 2020.

But the Legislature needs to approve the last piece of the project’s funding puzzle: $135 million in state money, said Metropolitan Council Chair Adam Duininck. He warned of consequences if the funding doesn’t come through this year.

“Our relationship with the FTA and the federal government in terms of building out our transit system would be damaged greatly, which is a challenge,” he said. “Those federal dollars are so competitive these days that we just know another region will be after them. So, it could potentially set the project back a year or so, or it might set it back even longer.”

Could it potentially kill it?

“I don’t like to use that word,” Duininck said, “but it’s always a possibility.”

GOP lawmakers have been warming to the DFL plan to fund transit projects though a metro area sales tax increase if that funding comes with reforms in the governance structure of the Metropolitan Council. They want local elected officials on the council, serving staggered terms. House and Senate transportation chairs said they expect the governor’s office and legislative leaders to join the next phase of negotiations.

House Transportation Chair Tim Kelly said he’s holding off on putting transit support in an offer as long as Democrats continue to push for a gas tax increase.

“The response is there because we didn’t think they took the gas tax issue very serious. So, that’s the way we felt against the first offer,” said Kelly, R-Red Wing. “So, to come out and put transit funding in immediately didn’t make sense to us, if that’s the way our offers are going to go.”

Senate Transportation Chair Scott Dibble, DFL-Minneapolis, said he was disappointed by the latest House offer yesterday and its failure to fund transit. Dibble stressed the importance of transit funding, given the region’s projected population growth.

“It doesn’t feel like we could pass a plan without major new investments for transit, particularly if we’re going to have … 800,000 people come to the metropolitan area,” Dibble said. “We can’t build enough roads to accommodate all of that.”

Minnesota business leaders and local government officials have been turning up the pressure on lawmakers to reach a transportation deal that includes transit. Nearly 200 county officials from throughout the state signed a letter this week urging action on a comprehensive, long-term bill.

Hennepin County Commissioner Peter McLaughlin said transit funding, including the Southwest Corridor, must be part of that solution.

“If we whiff on this, if we fail to provide a transportation bill this year, then we are leaving federal money on the table,” he said. “Money that’s going to Denver or Dallas-Ft. Worth or Houston or Seattle, all the places that we compete with. It’s not going to be coming here.”