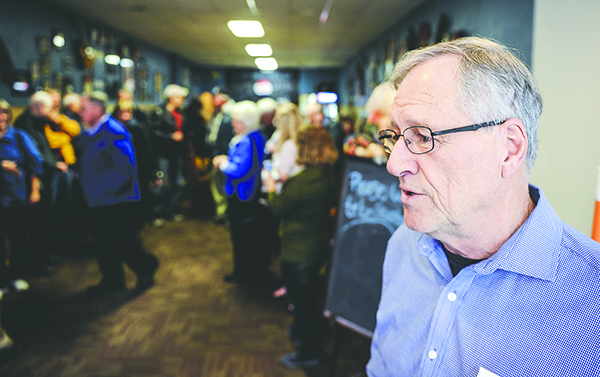 Dennis Schminke talks about some of the things he would like to get accomplished if elected, Thursday afternoon at Piggy Blues. – Eric Johnson/Albert Lea Tribune

AUSTIN — Dennis Schminke held and then watched one of his reasons for seeking state office — his grandson — toddle around Piggy Blue BBQ Thursday afternoon.

Schminke, a Republican, formally announced he will challenge Rep. Jeanne Poppe, DFL-Austin, for her District 27B seat this November during a speech at the Austin restaurant. He and his wife, Vicki, decided he should run due to concerns for their children and seven grandchildren’s future opportunities and long-term prosperity in Minnesota.

Schminke promised Mower County he’ll give straight answers without any spin and without simply repeating the party line. 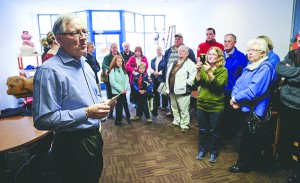 “I will support efforts that are broadly supported, beneficial to the district and oppose things where it’s individual, tightly-knit, focused interest groups that want their little thing at your expense,” he said.

He also said his campaign will only accept contributions from individuals and not from lobbyists, special interest groups, pacts, unions, party organizations or other industry groups.

He also promised he’d give out his personal cell phone number to constituents who wish to talk or have questions.

Schminke urged people to watch what the DFL does, not what it says. Schminke said there’s been plenty of liberalism in the state and country in recent years, and he argued that’s ended up hurting the people such plans aim to help the most.

Schminke argued the DFL often can’t see past the metro area and that its positions don’t square with the needs of the district and state.

“What they do is not good for the prosperity of the state, and it’s certainly not good for outstate Minnesota,” he said.

He called Minnesota a heavily regulated, high tax state that’s also on the path toward expensive energy, which he said will hinder growth, especially outside the Twin Cities and in border communities that compete against neighboring states.

In transportation, he wants to focus on roads and bridges rather than light rail.

Though Schminke said the legislative session has been relatively quiet thus far, he expects talks on transportation to pick up soon, especially as Gov. Mark Dayton pushes for a gas tax increase.

When the state budget is awash in money and has a surplus, Schminke doesn’t support a gas tax increase.

Schminke said state revenues are up $15 billion since the 2010-11 biennium. With the increased funds and several projected surpluses, Schminke questioned why the state can’t find a solution to road funding.

Schminke also said there is a place for the state to take care of people who truly can’t take care of themselves.

“Those we have to get right, and I think we all agree on those,” he said.

But there’s also a place where hard questions need to be asked, and Schminke said people need to demand better answers. For example, he questions why the state isn’t seeing better education results despite a high amount of money dedicated to education? He also questioned why higher education costs continue to increase well beyond the rate of inflation.

Schminke ale questioned the handling of MNsure, citing reports that said hundred of millions were used on its implementation and that it’s divvied out millions to people who weren’t eligible to receive funds.

“It’s a state agency that’s ripe for reform,” he said. “The way they set it up is all wrong. There’s no outside oversight.”

And Schminke said MNsure is just the tip of the iceberg when it comes to state spending, noting things like light rail, the new Senate office building, sports stadiums and more are also sucking up state money.

Schminke said something has to be done about MNsure, which he said has burned hundreds of millions of dollars.

Schminke grew up in Council Bluffs, Iowa, and has lived in Austin for many years. He has a background in accounting and finance. He retired in 2012 after working for Hormel Foods Corp. for 38 years. He also work in IT and later operations research at Hormel.

Schminke has been involved with the Mower GOP for several years.

Schminke unsuccessfully challenged Poppe in 2014, when he got 45.8 percent of the vote to her 54.1 percent. He also unsuccessfully ran for a school board seat.

Poppe is seeking her seventh term in 27B.