Every year on Memorial Day, we remember those we have lost while they served in our military. It is a time to reflect on how we honor these fallen heroes and how we treat those who have followed, our brave veterans, with the dignity and respect they have earned.

Throughout our nation’s history, Minnesotans have proudly served in our military. They’ve fought on the front lines. They’ve built roads and schools. They’ve made peace. They’ve kept us safe. And, together with their families, they have fought to ensure all those who have served are honored in death and respected in life. While we cannot change history, we can change the way service members are honored and respected.

John Anderson of Willmar died fighting in one of the most important battles in our history: D-Day. But for 70 years, after he did not return home, John’s family did not know what came of him. They were told that his remains were washed out to sea, but his nephew started researching and had reason to believe his remains were buried in an unmarked grave in Normandy. They asked the Pentagon to have the remains disinterred. The Pentagon denied the request. Twice. The family did not give up, including reaching out to our office for help. And when the remains were finally tested, it turned out they were right. John was indeed buried there in Normandy. This May, he is being buried at home, in Willmar. A final resting place for a true hero.

Elizabeth “Betty” Strohfus of Fairbault flew military planes across the country in World War II — she was a Woman Airforce Service Pilot, or a WASP. This year, I had the privilege of seeing Betty one last time before she died at the age of 96. She and her family were standing up for her WASP sisters and fighting for them to have the right to be buried at Arlington National Cemetery, the same right as other veterans. This May, the president finally signed the bill into law to instill that right. 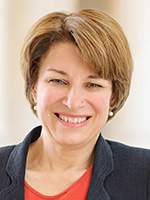 Another way we honor those who we have lost is by ensuring those who do come home have access to the healthcare, education and retirement benefits they deserve.

Take Melissa Gillett. She got into the National Guard with the intention on staying in for 20 years. That changed after her deployment to Afghanistan and exposure to burn pits — giant pits the military used to burn trash, everything from human waste to cars and aerosol cans. Melissa has experienced a host of negative health effects like sinus and respiratory issues. Because of her breathing issues, Melissa can no longer serve in the National Guard. She is one of nearly 65,000 Iraq and Afghanistan veterans who have begun the process of filing reports with the VA’s voluntary registry. These veterans inspired Republican Sen. Thom Tillis of North Carolina and me to introduce the Help Veterans Exposed to Burn Pits Act, which would create a center of excellence at the VA to better understand and begin to address the health needs of veterans who have fallen ill after exposure to burn pits.

Or take members of Minnesota’s National Guard, hundreds of whom were called to active duty and deployed to the Sinai Peninsula last year. While it was a peacekeeping mission, the guard members took mortar fire for months on end. When they came home, however, the Department of Veterans Affairs rejected their GI Bill applications. They told us about their struggle, and now Senator Al Franken and I are working to ensure that Guard and Reserve members can access the health care, education, and retirement benefits they have earned.

Our men and women in uniform — and their families — don’t stop serving our country when they come home. No, they keep on fighting for their fellow soldiers and veterans to be honored and respected. That’s a true memorial — one we should all work to emulate.

Amy Klobuchar is a DFL senator from Minnesota.