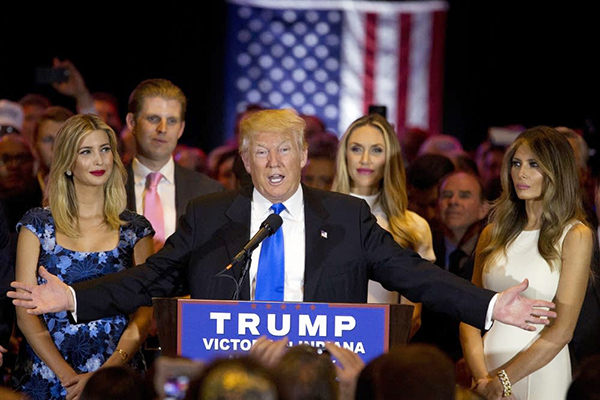 Trump was 3rd in the state in March caucuses

Minnesota Republicans now know Donald Trump is their presidential nominee-in-waiting. While many have kept their distance from the controversial candidate, they must now navigate an election cycle where he’ll be their party’s lead voice.

Some in the GOP who’ll be on November’s ballot said they’ll play the hand they’ve been dealt and try to keep the focus on local concerns. Others aren’t saying anything at all after condemning Trump for months.

Trump barreled through a field of prominent Republicans on the road to a nomination he now has all but locked up. But the billionaire businessman didn’t fare so well in Minnesota, where he was a distant third in the March precinct caucuses.

Republican House Speaker Kurt Daudt is a national convention delegate but said his top aim this November is preserving a GOP majority in the Minnesota House. House Republicans will work with Trump’s team to the extent they have to, he added.

“We’re excited for this election season and frankly we’re going to set our own destiny and not rely on anybody,” said Daudt, R-Zimmerman.

Daudt first backed Wisconsin Gov. Scott Walker’s attempt to win the GOP nomination. Walker was gone long before the March 1 Minnesota caucuses, so Daudt said he voted then for Florida Sen. Marco Rubio. After Rubio dropped out, Daudt joined a slate that was pushed by the Cruz campaign.

Asked if he’d now be supporting Trump, Daudt was coy.

“I don’t know that my support matters all that much. And I haven’t been vocal about supporting anybody since Gov. Walker got out of the race,” he said. “I also don’t believe people will make a decision about who to vote for based on who I’m going to vote for.”

A Minneapolis Star Tribune poll this week had Clinton ahead of Trump in a state head-to-head matchup. A Republican hasn’t won Minnesota’s electoral votes since 1972, so any nominee was looking at a steep climb.

But Daudt and other Republicans point out that Hillary Clinton poses problems for Democrats, too. She got drubbed in Minnesota’s caucuses by Vermont Sen. Bernie Sanders.

“What we’ve been hearing the past year is that Mr. Trump can’t win. He can’t possibly win. It’s just impossible for him to win. But he’s winning and keeps winning by bigger margins,” Hann said. “I think the sentiment that he can’t win a general election is probably suspect as well. And we’ll see what happens. There’s a long way to go. And if he’s the nominee, of course I’m going to support the Republican nominee.”

Even if Trump doesn’t win the state or keep it competitive, some longtime Republicans says he could shuffle some races such as the Minnesota 8th Congressional District rematch between incumbent U.S. Rep. Rick Nolan, a Democrat, and challenger Stewart Mills.

Trump’s protectionist view on trade will resonate in northeastern Minnesota where the steel industry has suffered in the face of cheap Chinese exports, said Kent Kaiser, who teaches a course on political communication at the University of Northwestern in Roseville.

Kaiser, who holds deep personal ties to the 8th District and Republican politics, said he believes Trump’s blunt, populist style will help draw the region’s voters to him who might also back other Republicans in the area.

“I think he’s going to be able to go up there and he will be able to lure a lot of voters because he’s not going to put up with that kind of political correctness and doublespeak that you often hear from the Democratic candidates on the environment and mining,” he said.

Paulsen’s office issued a statement through his campaign manager: “Like a lot of voters, Erik has problems with both Trump and Clinton but expects to vote for the nominee.”

Republicans defending seats in the Legislature won’t be able to easily get out of Trump’s shadow, added House Minority Leader Paul Thissen, DFL-Minneapolis.