Mother writes book about nourishment for the whole family 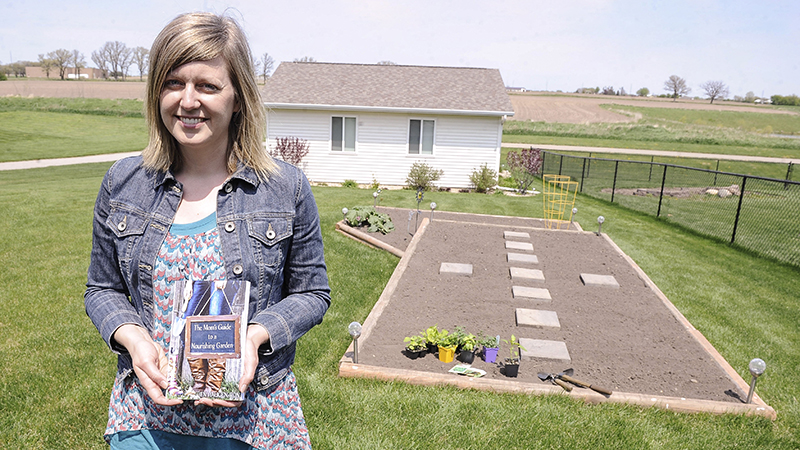 Jen Haugen holds a copy of her new book, “A Mom’s Guide to a Nourishing Garden.” The book tackles not only gardens, but cultivation of the soul, as well. - Eric Johnson/Albert Lea Tribune

Not long ago, Jen Haugen began to feel overwhelmed.

She was a registered dietitian for Hy-Vee at the time and was heavily involved in educating the public — especially children — on eating healthy, but the effort took time. Lots of time.

Finally, there came a tipping point.

“At that moment, I finally realized that I was teaching other people’s kids, but who’s teaching mine?” Haugen said, sitting on the back patio of her family’s home. “I was guilty at the lack of attention for them. I enjoyed my experience, but I wanted to have that experience with my own kids.”

Flash forward a few years, and now Haugen has made that time for her family and for other families looking to make that connection. 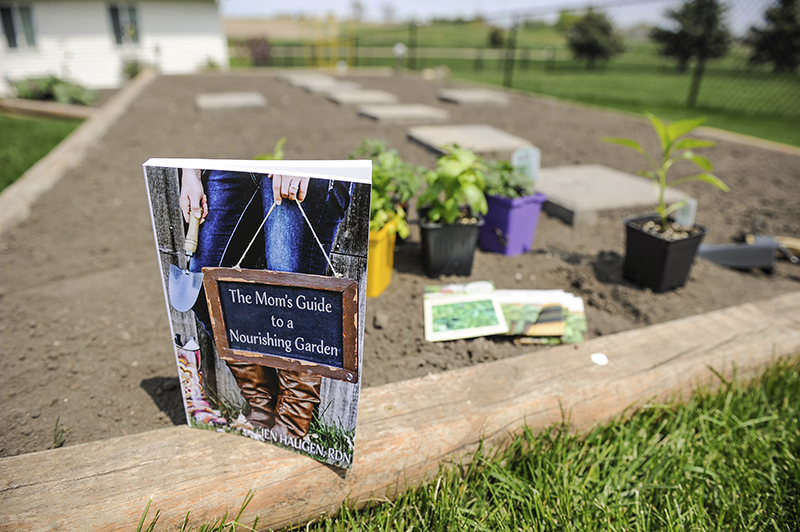 Haugen has recently released a book she wrote, “The Mom’s Guide to a Nourishing Garden,” available through Amazon.

Throughout the book, Haugen touches on many subjects, including food, involving family and — of course — includes recipes all centered on making sure the family is involved with the realization of how much power moms have toward making a difference in their children’s lives.

“Moms have the power to influence their family’s eating habits,” she said. “Research shows they are the primary influence.”

The idea of the book came not long after Haugen’s speech in Austin’s TEDxHoracePark Talks in 2014. She broached two subjects: 1. Planting a garden with children and 2. Cooking counter kitchen skills with children.

“About a month after I wrote a couple chapters and wrote an outline and then put it off,” Haugen said.

Thoughts started creeping into her mind about whether or not she could actually do it. A year later, however, this past fall Haugen returned to the idea with a renewed vigor.

“This past fall I started working on it constantly,” she said. “The goal was to get it done by Mother’s Day.”

Haugen met the goal with time to spare. The book was completed on April 20, the day of her daughter Emma’s birthday.

While the book has many valuable resources in regards to gardening, the book is much more.

“It’s not only a gardening book,” Haugen said. “It’s how a garden can feed a soul. Slow down and savor these moments.”

The roots, so to speak, to Haugen’s own interest in gardening date back to when she was a girl.

“I grew up gardening,” she said. “As a child I can remember a time when all five of us were working on the same thing.

“It’s an easy way to connect,” she said.

Working with the family on things like gardening is a natural bonding opportunity, but as a mom it’s a chance to learn.

“You learn a lot as kids about being a mom,” Haugen said. “You take parts of what you saw your mom do. You recreate those things for your children.”

Haugen sees the garden as an important step in influencing her own children’s eating habits by turning them into better fruit and vegetable eaters.

That comes from taking a hands-on approach to cultivating the garden and actively handling those things they consume.

The work takes a turn to fun.

“It’s incorporating kids,” Haugen said. “It’s more fun when you have people to help you weed.”

It also turns out to go a little deeper than that as she makes a somewhat surprising metaphor to compost. In the books she uses the letters of the word compost to spell out a recipe for life.

The metaphor extends to taking the time to make the most out of life and what it offers.

“A garden helps us slow down and so does the compost recipe,” she said. “Slow down.”

Another root to take hold in the book is taking a rather specific approach in regards to the family. The brings up a question families should ask before planting a garden: What do they like to eat?

“Planting for your plate,” she said. “(A garden that’s) specifically tailored  to what your family likes to eat.”

A key theme of the book is involving children, thus the title, “The Mom’s Guide to a Nourishing Garden.” Haugen has had no trouble on that front for her own children.

“I’ve had them in the garden since they were one,” she said. “In the spring we kind of gear up for it. It’s never too late for something like this. It’s really the focus on that child, no matter the age. It’s how kids get involved and stay excited.”

There is, however, another context: Knowing where the food comes from and learning.

If someone is a first-time gardener, among the things often learned is that sometimes the planting doesn’t work. And in a society where people aren’t as reliant on what they grow, it can be more about a learning experience.

Ultimately, it comes down to one simple factor.

“Talk with the family. What does the family like to eat?” Haugen said.

Planning the next garden

This book, which Haugen hopes is the perfect gift for Mother’s Day, served to bolster her own confidence on writing.

“The experience has been bumpy,” Haugen said. “At times I was super excited and then there were times I thought, ‘Is this really worth it?’”

Haugen learned about herself through the process and determined that not only could she see herself writing another book, she already has the early plans to start writing her next book, based on her second talking point from the TEDx talk: Cooking counter kitchen skills with children.

“It goes off the kitchen counter as a cooking school,” Haugen said. “Quality time in the kitchen with kids. What are the things I want them to come away with?”