Funeral services for Nylene A. Thompson, 89, of Hartland will be at 11 a.m. Wednesday at Cross of Glory Lutheran Church in Hartland. The Rev. Mark Hillmer will officiate. Burial will be at the Hartland Cemetery. Visitation will be from 5 to 7 p.m. Tuesday at Bayview/Freeborn Funeral Home and one hour prior to the services at the church. Online condolences are welcome at www.bayviewfuneral.com.

Nylene died Saturday, May 7, 2016, at Homestead Hospice in Owatonna surrounded by her family. 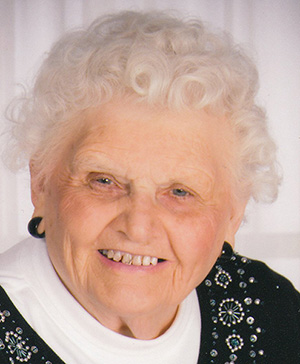 Nylene Audrey Thompson was born Aug. 21, 1926, in Kiester, the daughter of Alfred and Esther (Anderson) Bergerson. She attended the gravel pit school and graduated from Kiester High School. Nylene was united in marriage to Herman Thompson on May 31, 1952, at North Freeborn Lutheran Church. She worked as a nurse’s aide and physical therapy aide at Good Samaritan Society of Albert Lea, where she was named Volunteer of the Year.

Nylene enjoyed sewing, baking — she was known for her doughnuts — fishing and embroidery.  Music was a big part of her life. She played the piano with the 4-H friends, taught Sunday school children music and sung in the church choir. Nylene also volunteered at Farming of Yesteryear, where she gave tours of the home that she grew up in. She was an active member of Cross of Glory Lutheran Church serving with the Rachel Circle, altar guild, the church choir and as a Sunday school teacher.

Nylene is survived by her children Michael and Barbara Thompson, Douglas Thompson, Joanne and Curt Frisk, Arlene Thompson and Ron and Laurie Thompson; grandchildren Scott and Terri Thompson and their children Elizabeth and Audrey, Joe and Cindy Thompson and son, Corwin, Deanna and John Quade and sons Ryan and Brandon, Jeremy Frisk, Ben Frisk and Ashley Laue, and Karen and Andrew Tewes; brother, Marlin, and his wife, Kay Bergerson; sister-in-law, Donna Bergerson; and many nieces and nephews.