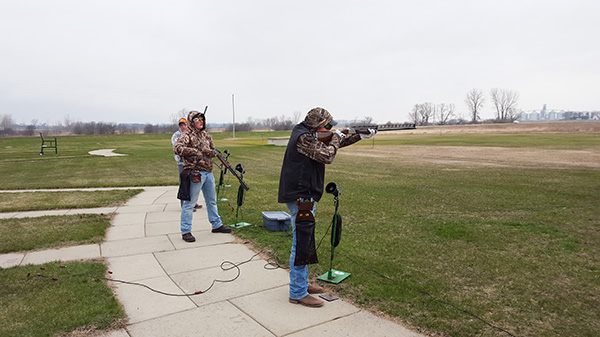 NRHEG’s Collin Christiansen takes aim while Kyle Bartz looks on. Both shooters have been top shooters on the clay target team and are hoping to make return trips this year to the Minnesota State High School League state individual tournament after missing qualification last season. – Provided

It was cold, it was rainy, and it was windy — but the NRHEG clay target team would not be driven from the range as it started competition in the Minnesota clay target spring league, according to a press release.

The team is fielding 65 shooters this spring, which is an all-time high. Having a large team means they are going up against some well-known large schools from across the state. The size of the school can mean little when weather is your opponent.

Scores across the board for the NRHEG shooters were down a bit, but overall they were still competitive enough to put the team in second place behind the team from Faribault High School.

“Statistically, it’s a dead heat,” said coach Dan Sorum. “With just 698 points difference, there is no clear leader for the first week.”

The team was led by NRHEG students Collin Christiansen and Carter Hagen who each shot 47/50 targets. This places both students in the top 100 in the state for week one. The top 100 is a significant goal for the athletes as it is the students with the top 100 averages at the end of the season who will qualify for the Minnesota State High School League state individual tournament. If both shooters can hold out for the season, it would be Christiansen’s second trip and Hagen’s first.

Week two of five total, competition weeks started on Sunday. The NRHEG team shoots from 4 to 7 p.m. Wednesdays at the Owatonna Gun Club south of Hope. Spectators and fans are welcome to come and cheer on the team.