Funeral services for Bob Steele will be at 2 p.m. Wednesday at First Lutheran Church in Albert Lea. The Rev. John Holt will officiate. Interment will be in Graceland Cemetery. Visitation will be from 5 to 7 p.m. Tuesday at Bonnerup Funeral Service and again one hour prior to the service at the church. 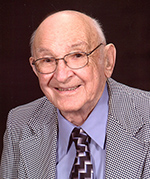 Robert F. Steele was born Aug. 11, 1921, in Conger to Frank and Irma (Pfeiffer) Steele. He was baptized and raised in Concordia Lutheran Church of Pickerel Lake and later joined First Lutheran Church in Albert Lea. Bob married his wife, Gladee Haugland, on Dec. 18, 1943, at First Lutheran Church. Together, they raised three girls. He grew up on a farm and helped his father with it for many years.

Bob worked at Queen-Stove and King-Seeley until his retirement. He served on the Albert Lea town board and was very active in the Elks for many years. He enjoyed taking care of his country lawn and flower gardens, fox hunting, snowmobiling and tinkering in his basement with two-way radios and was in a radio club for many years. In his later years, he so enjoyed his daughter’s Friday visits and his visits to Wedgewood Cove.

On Friday, May 27, 2016, Bob Steele passed away, surrounded by his loving family, at St. Marys Hospital in Rochester, at the age of 94. His quick-wit and sense of humor will continue to live on in those who knew him.