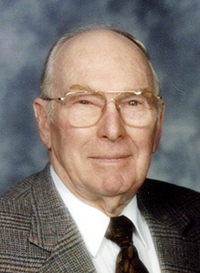 A funeral service will be at 2 p.m. Saturday at Emmons Lutheran Church in Emmons with the Rev. Christopher Martin officiating. Burial will take place in Oak Lawn Cemetery in rural Emmons, with the American Legion Louis/Tveite Post No. 317 conducting military honors.

Visitation will be one hour prior to the service at the church on Saturday.

Roger Dean Marpe was born Oct. 6, 1929, in Albert Lea, the son of Louis George and Augusta W. “Babe” (Simonson) Marpe. He was baptized at home and confirmed at Swedish Lutheran Church near Kiester. Roger attended country school and graduated from Emmons High School, following which, he attended Mankato State Teachers College in Mankato.

After battling polio at the age of 19, Roger was drafted into the United States Army.  He served through the end of the Korean War and was stationed in Germany, Texas and Oregon. Being honorably discharged from his military service, Roger returned home to Zona Mae Rovang.  The couple was married Oct. 17, 1954, at Emmons Lutheran Church. They made their home south of town where Roger farmed and was an insurance agent. They raised three boys, Scott, Todd and Kary.

Roger had many hobbies and passions, including farming, golfing, hunting, fishing and traveling. He enjoyed farming, even planting beans the week prior to his health declining. He golfed at Arrowhead Golf Course with his buddies, hunted and fished locally and on excursions with family and friends, and made countless memories taking trips to Europe, Hawaii and Alaska. He was active in Worth County Northern Prairie Pheasants Forever, Ducks Unlimited, and Worth County Soil and Water Conservation, of which he was chairman. Roger was active with Louis/Tveite American Legion Post No. 317 in Emmons, where he had been the commander.

The family wishes to thank the staff at Mercy Medical Center in Mason City for the care Roger received, and — most importantly — for the attentive support shown by granddaughter Nicole’s husband, Brad, during this difficult week.