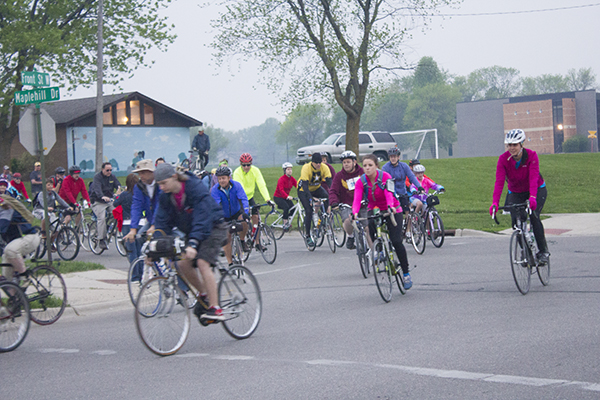 Dozens of bicyclists rode in the 44th and final Freeborn County Bike-A-Thon, which began Saturday morning under a hazy, cloudy sky to raise awareness for cancer research.

Juveland said David Anderson of Aktion Club has raised more that $3,000 from door-to-door donations, and she said other people have also raised large amounts.

The amount raised from this year’s event will be announced later this month.

“It’s just been something that the community has supported for years,” she said.

Participants this year ranged from 10 to 73 years old.

The committee has worked with several organizations and volunteers over the years to make the event possible, including REACT, the Amateur Radio Club, First Baptist Church, and service clubs such as Noon Daybreakers, Aktion, Golden K1 and K2 Kiwanis clubs; the Rotary Club and the two Lions clubs.

The full, 100-mile ride started at the Sibley Elementary School warming house and included stops in Glenville, Myrtle, Hayward, Geneva, Hartland, Freeborn, Alden and Conger before finishing in Albert Lea. Participants had the option of riding the entire way or stopping at one of the checkpoints.

Bicyclist Mike Pleiss said participating was a way he could help a friend who had passed away, who had been best man at Pleiss’ wedding.

“It’s just something we can do to find a cure,” she said.

After a short prayer and introduction, the race began at around 6 a.m.

Larry Shaunce, who has worked in the communications room at the event for decades, said he has grown accustomed to working until about 5 p.m. on race day to ensure rider safety.

“It’s kind of sad to see, but all good things must come to an end,” he said of the Bike-A-Thon’s final year.