The 16-year-old boy arrested Friday night after an alleged armed robbery in Albert Lea was charged on Monday in Freeborn County District Court with first-degree aggravated robbery and second-degree assault.

Efren Estrada of Albert Lea reportedly walked up to the counter of the Mileage gas station, 901 W. Main St., and took out a gun from his jacket pocket, according to court documents. He was reportedly wearing gloves and a mask, repeatedly requesting to put money in his bag. 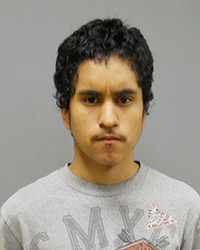 Estrada was arrested after a foot pursuit west of the gas station a few minutes later with a Minnesota Department of Natural Resources conservation officer. Court documents state when Estrada was taken into custody, he had a handgun sticking out of the front of his pants.

It was removed and found to be a BB gun, though it was a realistic plastic replica of a firearm, the court report stated. A white cloth money bag was found on Estrada’s right side.

Reports stated Estrada matched the description given of the reported robber and the video surveillance.

That means if Estrada is found guilty of his charge, he would get both a juvenile disposition and an adult sentence. The adult sentence would be stayed.

If he violates the rules of the juvenile disposition, he would be required to serve the adult sentence.

The names of juveniles who are 16 years or older and charged with a felony are not kept secret by the Minnesota justice system.