The Tigers take down the Panthers 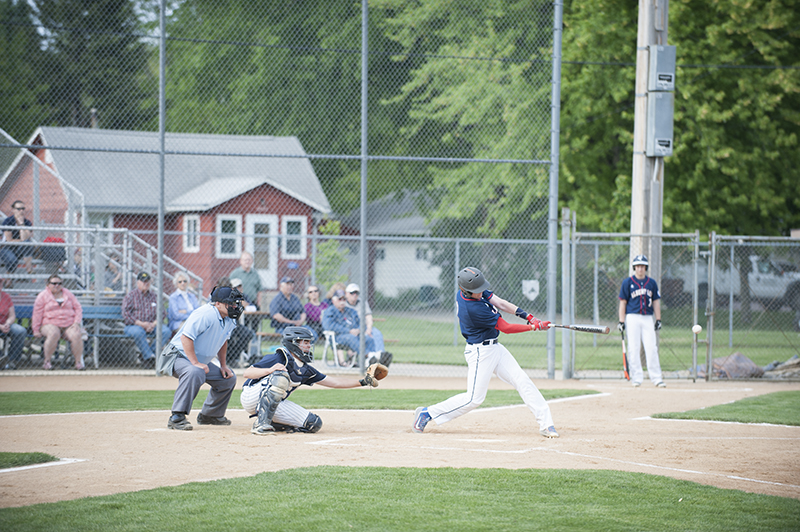 Albert Lea catcher Zach Edwards connects on a pitch thrown by Rochester Century’s Luke McKeon in the second inning Friday at Hayek Field. The end result turned out to be a double play, as the ball found the third baseman’s glove and Alex Bledsoe was double-off second base. - Jarrod Peterson/Albert Lea Tribune

Albert Lea endured nearly a 45-minute bottom of the third inning, but in the end it served the Tigers well. They scored three runs in the inning off Rochester Century pitcher Luke McKeon, and it spurred the Tigers to a 7-4 victory Friday night.

“It was nice to see the bats come alive again,” said Tigers coach Joe Sczublewski. “We had timely hitting all throughout the lineup. And our defense was superb as well.”

The Tigers got nine hits and committed no errors as they scored three runs in the third inning and three more in the fourth inning.

The third inning started with Taylor Heavner getting hit by a pitch. Tanner Bellrichard and Mason Hammer drew walks, then Jake Thompson drove in Bellrichard with an RBI single.

Parker Mullenbach walked, and Ben Witham made McKeon pay with all those walks by smacking a two-run double to left center.

McKeon really took his time on the mound and the baserunners seemed to bother him.

The three runs helped starting pitcher Heavner and the Tigers recover from giving up one run in the second inning.

The Tigers weren’t done, though. In the fourth inning, Thompson drove in two runs and Mullenbach drove in Thompson with an RBI single.

On the mound, Heavner labored, but got through four innings to earn the victory.

For the second night in a row, Jacob Bordewick came on in relief. This time, he picked up the save. He pitched three innings and struck out three Panthers.

The Tigers had done something Friday that hasn’t happened since Sczublewski can remember.

“I don’t remember a time when we swept all three Rochester schools in conference in one season,” Sczublewski said. “And if I do, it was a very long time ago. It’s a pretty good accomplishment for these guys, and I’m proud of them for accomplishing it.”

The Tigers beat Rochester John Marshall on April 28 and Mayo on Thursday.

They seem to be catching fire at the right time.

“We are on a good roll,” Sczublewski said. “We have been playing good ball, and have been getting production in the field and at the plate.”

Over the last 10 games, the Tigers have outscored their opponents 55-32 and have managed to pitch two shutouts during that span.

The Tigers will wrap up their regular season on Monday when they host section opponent Stewartville.

Stewartville played Byron in a doubleheader on Thursday, but results have not been posted.

Prior to the doubleheader, Stewartville has lost four games in a row and five of the last seven.

During the four-game losing streak, it has been outscored 21-8.