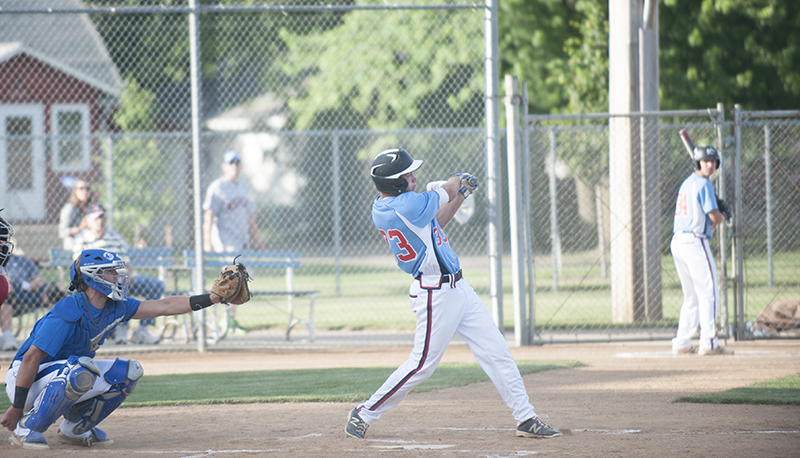 Mason Hammer rips a double in the first inning of Tuesday’s game against Owatonna. He finished the game 3-4 with a single, double and triple. Jarrod Peterson/Albert Lea Tribune

The weather was nearly flawless for Tuesday night’s game between Albert Lea Legion Post 56 and Owatonna Post 77 at Hayek Field.

However, Post 56’s pitching was far from flawless the entire night.

Nonetheless, a huge fourth inning saw Post 56 plate 10 runs to lead them to a 15-8 victory.

Jake Kilby got the start, but was far from his regular self. His control was lacking right from the start.

Kilby walked the first two batters. After an error loaded the bases, he walked in a run.

Miraculously, it was the only run he would allow in the inning as he was able to get out of the jam.

Post 56 got the bats going right away as Mason Hammer led off with a double. Later, Ben Witham singled, then Alex Bledsoe reached on an error that scored Hammer. Kilby drove in a run with a single, as well.

Things got shaky again in the fourth inning.

After retiring the first batter, Kilby surrendered a single, then walked the next two batters.

An error and another walk followed, with runs scoring on both plays.

Kilby was replaced by Jacob Bordewick, but he walked the first man he faced. That allowed another run to come in.

Post 77 scored its final run of the inning on fielder’s choice to take a 7-3 lead. 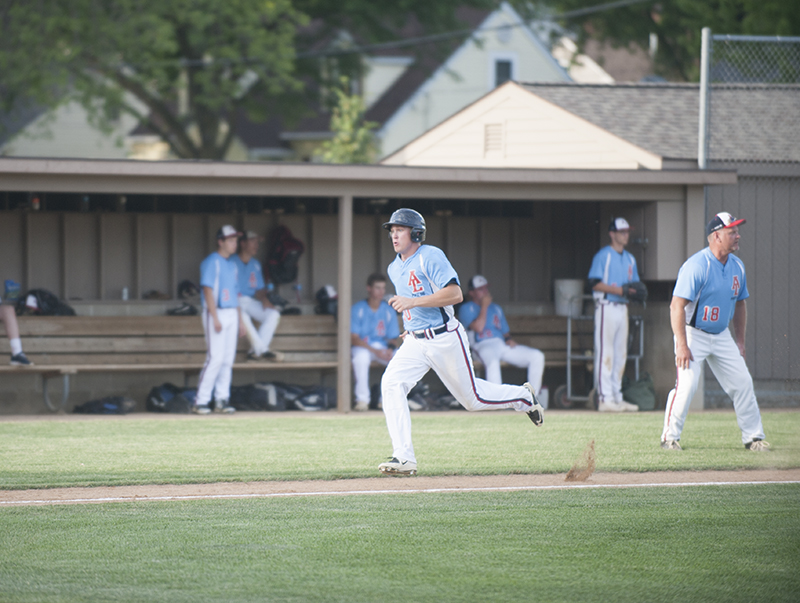 Albert Lea’s Ben Witham heads for home in the first inning on an RBI single by Jake Kilby.

Three singles to start the inning put a run on the board for Albert Lea. Jake Thompson walked, then Parker Mullenbach  walked to bring in another run.

In the next at bat, Witham smoked a pitch up the middle that was too hot for the shortstop to handle. Everyone was safe and a run was scored.

Albert Lea got another run on a failed fielder’s choice attempt of a throw to home plate. The throw arrived too late and wasn’t handled by the catcher. A sacrifice fly tacked on another run for Albert Lea, then Bordewick ripped an RBI single.

But Albert Lea wasn’t done yet.

Tanner Bellrichard ripped a two-run double and Hammer followed with an RBI triple.

Later in the game, Thompson finally  joined his teammates in the hit column when he launched a home run to right field that smacked off the Cargill sign on the new scoreboard.

Post 56 will head to Mankato this weekend with games on Friday and Saturday, but will be missing some key pieces.

“It’ll be a big weekend for us, but we will be without some of our players due to other obligations,” Enderson said. “Nonetheless, we going to go down there to compete, and we are going to the best we can.”