A principal of principles at Hollandale school 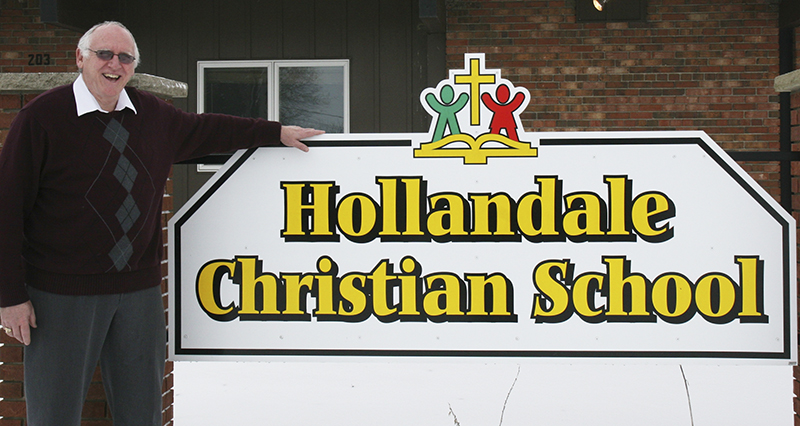 Enno Haan is the “teaching principal” at Hollandale Christian School where grades kindergarten through eight learn with the Bible integrated into every subject. - Cathy Hay/for the Albert Lea Tribune

HOLLANDALE — Enno Haan of Hollandale Christian School describes himself as a “teaching principal.” He is administrator of the private school and also teaches language arts, physical education and history to grades seven and eight.

“I’ve had the opportunity to be a full-time principal, but I can’t see myself in an office all day,” he said.

He prefers to be in the classroom, teaching and reaching junior high students.

“I’m like their spiritual grandfather,” Haan said. “My passion is for them to know Jesus.”

This is Haan’s third year at the school. He started his career in Wisconsin, moved to northwest and central Iowa, and then back to Wisconsin before coming to Minnesota.

He graduated from Dordt College in Sioux Center in northwest Iowa, where his father served as the first president of the small private school. Haan pretty much grew up on the campus. The college takes its name from the historic Synod of Dordrecht, held in the Netherlands in the early 1600s.

Hollandale Christian School is also rooted in Dutch traditions and convictions. The school opened in 1950, reflecting the decision of many immigrants to continue teaching their children from the Bible. The school moved from a three-room building north of Hollandale to its current building — originally the town’s public school — after several small towns consolidated into Albert Lea in the mid-1960s.

Its mission hangs above the gym doors: “To provide a Bible-based, Christ-centered education that develops academically prepared young people who embrace Christ’s call to transform the world.”

The school works with parents on a “tripod” approach to developing the whole child: home, school and church. Another three-fold approach makes the school unique, Haan said, with a focus on developing the head, heart and hands, meaning academics, faith in Christ and service to others.

The school consists of grades kindergarten through eight, with kindergarten now all-day, every-day. Reminiscent of one-room country schools, Hollandale combines grades one and two, three and four, five and six, and seven and eight, with each class having about 15 to 24 students. After an enrollment high of 90 students a few years ago, the school now has 67 and is looking to increase that number. Students come from Albert Lea, Austin and the Hollandale area.

Like any other school in the area, it includes an office, gym, library, classrooms and playground. Also like other schools, students learn reading, math, history and other core subjects. They also take standardized tests to measure their progress. The teachers are all college-educated and licensed by the state of Minnesota.

Unlike public schools, the teachers here integrate the Bible into all subjects. Haan said he is excited when opening a history book to sees how the Lord’s provenance has shaped history. In science, God is the creator.

The school day opens and closes with prayer, with prayer also at lunch. Students are free to worship anytime, stopping to sing a song or write a letter to Jesus.

“You should see some of the beautiful letters these students write,” Haan said.

All the families and staff are Christian, the school board is made up of parents and all families make a commitment to support the school. In addition to paying tuition, parents volunteer to serve, from making lunch to working on committees.

Noting that students come from 18 churches, Haan emphasized that the Hollandale school is not affiliated with any specific church or Christian faith.

All classes are self-contained, though students move around a bit and have different teachers for some subjects, like computer lab. Haan himself raised his five children in private Christian schools, all in self-contained classrooms.

The Hollandale school is a member of Christian Schools International, which offers services such as curriculum and training.

For more information about Hollandale Christian School, call 507-889-3321 or visit www.hollandalechristian.org. To enroll, families need to apply to the school, including a reference from their church and an interview. While its educational cost per student is $6,000 a school year, tuition is $4,000. The administration understands that finances can be an issue and is willing to work with families, Haan said. Contributions from alumni, churches and supporters of Christian education all help subsidize the school.

32 – Years of teaching for Haan