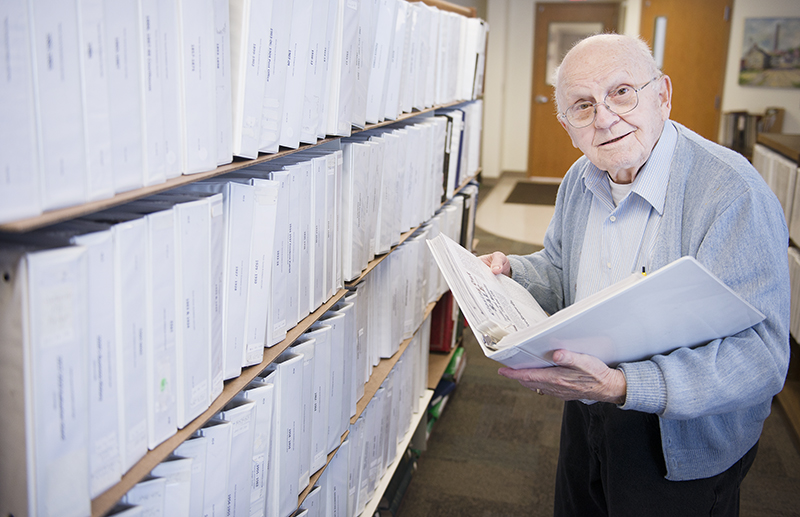 Ed Shannon spends a lot of his free time volunteering for the library at the Freeborn County Historical Museum. - Colleen Harrison/Albert Lea Tribune

One Albert Lea transplant has garnered a reputation as the Albert Lea area’s self-appointed historian.

Ed Shannon said he has been interested in history and the past itself for as long as he can remember.

Shannon, now 88, is originally from Baker, Oregon. He went into the United States Army straight out of high school, actively serving from 1945 to 1947. During that time he served overseas during the U.S. occupation of Korea.

In 1947 Shannon moved to Minnesota and attended college in Mankato. He graduated in 1950 and then went to Fort McCoy in Wisconsin as part of his Army Reserves duty.

After finishing his reserve duty, Shannon said he was a school teacher for a number of years before moving to Albert Lea in 1958. He worked different jobs at places like Land O’ Lakes and Olson Manufacturing for years, before starting at the Albert Lea Tribune on Aug. 6, 1984.

“I came to the Tribune, and that was it,” he said.

First hired as a writer — covering everything from law enforcement and car wrecks to features, play reviews and even some sports — Shannon was most known for his historical lifestyles features, weekly column and the daily Peek at the Past in the Tribune. His lifestyles features often looked into aspects of Albert Lea history and the surrounding Freeborn County area. At times, Shannon also wrote about cities in nearby counties. His column, “Between the Corn Rows,” ran every Friday in the Tribune from 1984 until Shannon’s retirement in 2011 — with just three exceptions.

Since retiring from the Tribune on Dec. 20, 2011, Shannon has volunteered at the library inside of the Freeborn County Historical Society three times a week.

“I wasn’t ready to just retire,” he said. “It was something to do.” 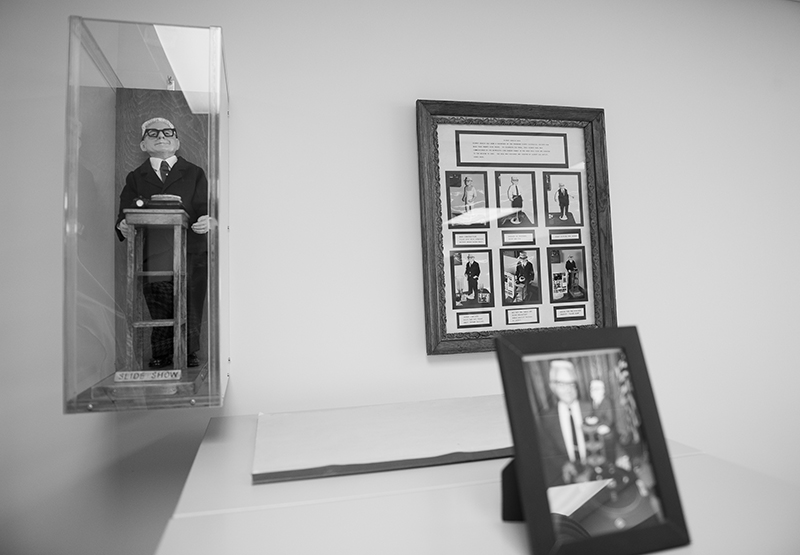 What may be one of the most unusual dolls in the region was created by Agnes Boss in 1992. It’s based on the late Bidney Bergie, who gained area fame for his popular slide show photo presentations based on city and county scenes of the past. On the upper right are six photos showing how the doll was created. In the foreground is a photo of Bergie standing next to his doll. Ed Shannon said Bergie and Kevin Savick encouraged his look into Albert Lea’s history. – Colleen Harrison/Albert Lea Tribune

Shannon said he has always been interested in history, which may have first been piqued when he was a child by hearing of his grandparents’ journey on the Oregon Trail. As he grew up, that historical fascination came with him and was transferred to Albert Lea.

Two local figures that Shannon said encouraged his look into Albert Lea’s history were the late Bidney Bergie and Kevin Savick, who Shannon said often helped him gather information for his historical features.

Someone who still helps Shannon with his historical digging is Linda Evenson at the Freeborn County museum. He also credited Tribune readers — sometimes even ones from out of state — who he said have been helpful in contributing ideas and information over the years.

Besides his work at the museum, Shannon continues to stay busy with his family and within the community. He is a member of the American Legion, Veterans of Foreign Wars and Disabled American Veterans, and starts most of his mornings with a visit to the senior center in Albert Lea.

Shannon said Albert Lea is a nice place to live and he likes the history of the town.

1,410 – Columns Shannon said he wrote for the Tribune

3,517 – Articles for the Tribune that Shannon said have his byline

27 – Years Shannon worked at the Tribune (plus four months)