An Albert Lea woman pleaded guilty on Friday in Freeborn County District Court to a lesser charge tied to a reported stabbing in December.

Ashley Nicole Randall, 22, pleaded guilty to misdemeanor recklessly handling or using a dangerous weapon related to the stabbing and gross misdemeanor domestic abuse no contact order violation tied to a separate case. She previously faced additional charges of second-degree assault with a dangerous weapon and felony domestic assault. Those charges have been dismissed. 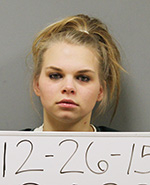 Randall was arrested after officers from the Albert Lea Police Department and Freeborn County Sheriff’s Office were dispatched Dec. 26, 2015, to 802 E. 18 1/2 St.

The victim, Randall’s ex-boyfriend, reportedly sustained an approximately half inch to an inch wound to the abdomen and was transported by ambulance to Mayo Clinic Health System in Albert Lea. He was treated and released the next day.

Randall is slated to be sentenced Aug. 25.