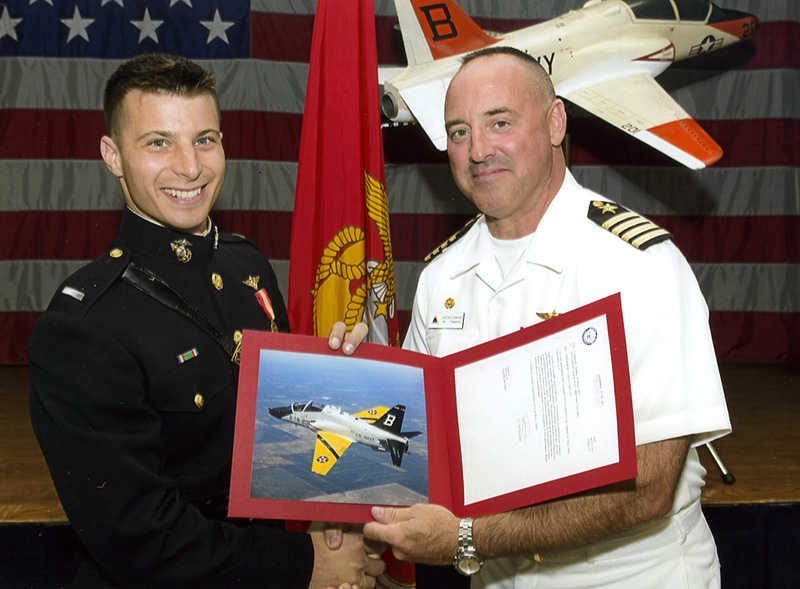 Captain Nicholas Koza was presented with the Commodores List Award and his aviation wings during a ceremony on May 20. - Provided

Captain Nicholas Lee Koza received his aviation wings and will be train for a year in Beaufort, South Carolina, in the F-35B Lightning. Upon completion of the training, he will be stationed at the Marine Corps Air Station in Iwakuni, Japan, for three years. Koza was presented the Commodore’s List Award at the winging ceremony. The distinction is achieved by only the top 10 percent of students attending the intermediate/advanced flight training program at the naval air station in Kingsville, Texas.

Koza received his Marine Corps Officer’s commission in September 2011 and reported to basic school in June 2012. After graduating, from basic school, Koza reported to the VT 3 Red Knights squadron in Pensacola, Florida, to begin his aviation preflight indoctrination flight training with the VT 22 Golden Eagles squadron. There he flew the T-45C Goshawk.

Koza is the son of William and Lynn Koza from Albert Lea. He is a 2007 graduate of Albert Lea High School and a 2011 graduate of the University of Nebraska in Omaha, where he graduated with a degree in aviation.