Benefit to raise money for memorial for shooting victim 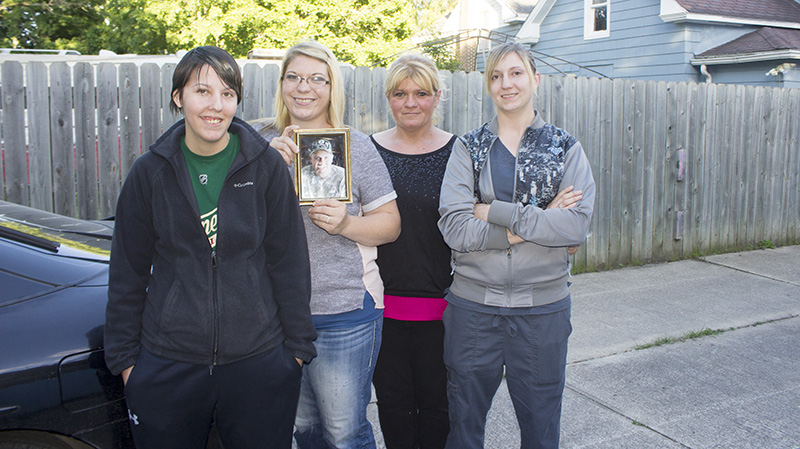 Kelly Hatch, Jordann Kunkel, Lori Callahan and Cady Baseman are trying to survive without family member Cody Baseman. Memories of him keep the hope he sparked in their lives ever present. The family members are shown here with his picture in front of his ’94 Ford Probe GT. - Sam Wilmes/Albert Lea Tribune

An Albert Lea family is recovering from the death of a family member.

Though the journey has so far been tough, they hope to pull through with the power of faith and a strong community.

A raffle and benefit for the family of Cody Alan Baseman will be from 4 to 8 p.m. June 24 at the Albert Lea American Legion to help pay for Baseman’s memorial and expenses.

Baseman was killed in a shooting death in September on Academy Avenue. Albert Lea police ruled the death as accidental in January.

Baseman’s mother, Lori Callahan, said the idea for the event was formed after she visited her son’s grave at Hillcrest Cemetery on Mother’s Day and noticed there was no headstone. She said the benefit will ensure a proper memorial for him.

She said $1,100 of the $4,000 needed for the headstone has been raised. The family noted their appreciation to local businesses for their donations.

Baseman’s aunt, Jordann Kunkel, said Baseman would help anyone out, noting she thinks he would be the first to attend this kind of benefit.

“This gives the community time to give back to him in a different way,” Kunkel said.

Callahan said Baseman would give his last dollar to someone in need.

Kunkel said life has been hard since his death.

“Time has stopped,” she said. “We basically all are living differently.”

Baseman’s family described him as a jack of all trades and a skilled mechanic.

Callahan said Baseman was the rock of the family, noting they could hear him laughing and talking to family members.

“It was contagious,” Kunkel said. “He made everybody laugh.”

Though they admitted that learning to live without Baseman is hard, they said their faith is providing them the knowledge that one day they will be reunited with him forever. They said they now are reminded of Baseman through his children.

Kunkel said if she could tell Baseman anything, it would be that the benefit is for him, noting she believes he is in a better place.

“Somewhere up there he is working on cars,” she said.

Kathy Kunkel, Baseman’s grandmother, said he was always there to help her, noting she felt a special bond with him.

Callahan’s boyfriend, Darin Halstead, said Baseman taught him everything he knows about fixing things — from houses to cars to yards.

“When I lost him it was like losing my right hand,” Halstead said. “We did everything together. Cody was my best friend. Whenever I needed something he was the first person to jump up to help me out.”

He said Baseman would have been the first person to make sure he had a meaningful headstone if he died.

“Cody had a heart of gold,” he said. “I cannot wait to be with Cody again one day. I miss him more than words can describe.”

Prizes will be awarded at the benefit, and a raffle drawing is at 7:30 p.m. Raffle tickets are $2.

Friday night dinner specials and prize baskets of up to $100 donated by area businesses will be available.

What: benefit and raffle for the family of Cody Alan Baseman

Why: to pay for Baseman’s memorial and expenses