He married the love of his life and soul mate, Elizabeth A. Blute, June 2, 1951, at St. Peter Catholic Church in Trenton and their journey began. In 1952 he attained an appointed fellowship in general surgery at Mayo Clinic, which he completed in 1956. 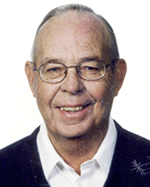 He began his medical practice at Lake View Memorial Hospital in Two Harbors. The only surgeon in the area, he was on 24/7 and assisted in Grand Marais and Silver Bay as well.

During his career — as a very innovative, dedicated surgeon — Bernard attained the honor of fellow with the American College of Surgeons, an elite scientific and educational association. After a very rigorous evaluation of his standards and practices, it was determined that he merited the title Dr. Bernard L’Esperance MD, FACS. Throughout his career, he initiated, developed and enhanced many surgical procedures — especially in the area of cancer eradication.

A well-loved and respected surgeon, he retired in 1989 from Lake View Hospital after 33 years and 17,000 operations. He will be remembered not only for his professionalism, but his kind, compassionate care and gentle bedside manner.

Strong in faith, Bernard was a member of Holy Spirit Catholic Church in Two Harbors, where he often served as a lector. He also found time to serve on the board of directors for First National Bank in Two Harbors.

A sportsman at heart, his life had also been filled with participation in hockey, curling, bowling, hunting, fishing and golf.

Throughout all of his career years, Bernard enjoyed his daily lunch date with his beautiful wife, Elizabeth, whom he so deeply loved.

Although very dedicated to his profession, Bernard balanced work and family. A consummate professional and dedicated family man, Bernard never lost his stellar sense of humor.

Following his retirement, he and Elizabeth spent their years in Sun City West, Arizona, and continued to enjoy dancing, traveling and spending time with family.

He died Monday, June 20, 2016, at Oak Park Place in Albert Lea, where he and Elizabeth had been living to be closer to daughter Mary Beth. He was 89.

He was preceded in death by his parents and four step-siblings.

Acknowledgements may be sent to the family in care of Mary and Frank Mueller, P.O. Box 81, Clarks Grove, MN 56016.