Bonnie Skaar Johnson, 74, of Charles City, Iowa,  passed away Tuesday, May 31, 2016, at Cedar Health in Charles City due to complications of multiple sclerosis.

A memorial service for Bonnie Johnson will be at 11 a.m. Thursday at St. John Evangelical Lutheran Church in Charles City. The Rev. Bill Odermann will officiate. A gathering of family and friends will be at Hauser Funeral Home from 5 to 7 p.m. Wednesday and will continue one hour prior to the memorial service at the church.

Bonnie was born Oct. 26, 1941, in Albert Lea. She was raised in a small Lutheran community in Hayward. Bonnie graduated from Albert Lea High School in 1959 and Luther College in 1963, with a degree in elementary education and a minor in Norwegian studies.

Bonnie married Carl Johnson in June 1962. They later divorced. They were blessed with two children, Diedrich and Erika. Bonnie taught children in the Title 1 reading program for 33 years in Charles City schools, the majority of the time at Immaculate Conception School. 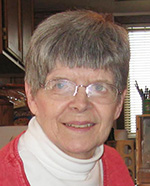 Bonnie was a member of P.E.O. Chapter JQ and enjoyed book clubs and bridge club. She was an ADK member and was the recording secretary. She was a deacon at St. John Evangelical Lutheran Church and secretary of Women of the Evangelical Church Association. She also served on many committees and was a member of the Charles City Library Board of Directors. After retirement, Bonnie especially enjoyed time with friends and visits to Colorado to be with her children and grandchildren.

Hauser Funeral Home in Charles City is in charge of local arrangements. Online condolences may be left for the family at www.hauserfh.com.