Albert Lea grad steps up training, nutrition and finds success in the pool

Morgan Field had plenty of inspiration to excel in swimming this year. 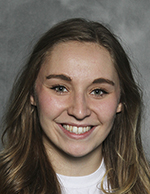 “There’s something about 16 years (swimming) and it being your last year that has really motivated me,” the second-year captain said. “This was my year to step up.

“I’m very happy that I can continue swimming,” she said. “That’s hard to do if you don’t have great people around you.”

“She’s having her best season her senior year,” Gustavus Adolphus head coach Jon Carlson said. “It was just a combination of having the right attitude and a desire to excel. She has an incredible work ethic.”

She has been swimming the breaststroke since the second grade.

“I think it’s the most fun,” she said. “Breaststroke is special in the sense it’s very different from the others. You have a different kick, and you’re breathing every stroke. You have underwater pullouts instead of underwater dolphin kicks.”

“She’s given a lot of thought to her swimming,” he said.

“She’s very diligent about her technique and trying to figure out what makes her time faster,” he said. “She’s always tried to find more efficient ways to get through the water fast. It’s been a gradual improvement every year. Just being able to continually improve is a great motivation for the next season.”

Field said Carlson’s change in training has helped her.

“We’ve really focused on racing in practice,” she said. “I’m a big competitor.”

“Relays are a lot of fun,” she said. “It’s not just you and your heat. You’re swimming for three other people in your relay.”

Field looked forward to the Feb. 18 to 20 Minnesota Intercollegiate Athletic Conference Championships. She was fourth in the 100 breaststroke and fifth in the 200 breaststroke during last year’s conference championship win, the team’s sixth consecutive.