A memorial service for Clair N. Dahl will be at 11 a.m. Friday at First Lutheran Church, Ellendale. The Rev. Richard Sliper will officiate. Visitation will take place one hour prior to the service at the church. Interment will take place at Central Freeborn Cemetery.

Clair Norman Dahl was born May 14, 1929, to Norman and Clara (Morriem) Rustebakke in Fort Dodge, Iowa. His mother died during childbirth and he was adopted by his aunt and uncle Albert “Ted” and Ada Dahl. Clair attended Albert Lea schools and later earned his general education degree. Following his schooling, he enlisted in the United States Air Force, where he served overseas in places like Guam and Iwo Jima. Clair lived in Albert Lea; Latrobe, Pennsylvania; Cherokee, Iowa; and most recently, Ellendale. 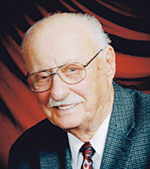 On Aug. 15, 1959, he was united in marriage to Marian (Schmidt) at First Lutheran Church in Albert Lea. The couple was blessed with two children, Sherry and Theodore.

Clair worked for Wilson and Co. for many years. He also worked as a flight instructor at the Albert Lea Airport and later the Latrobe Airport. Most recently, he worked at Greenview Rest Area. Clair was a member of First Lutheran Church in Ellendale, where he became very active in many church activities. He was also active in the Albert Lea Horse Club in his earlier years, Via De Christo, Chapter 13, QB’s, and the EAA Vintage Aircraft Association, where he helped start Tall Pines Cafe and was awarded the first Volunteer of the Year in Oshkosh.

In his free time, Clair enjoyed playing golf, going fishing, woodworking, genealogy and of course — his love of flying.  Most of all, Clair liked to visit with friends and family.

He is preceded in death by his parents, both biological and adopted; brothers Kenneth Rustebakke and Kenneth Dahl; and sisters Adelia Van Riper and Irene Thompson.