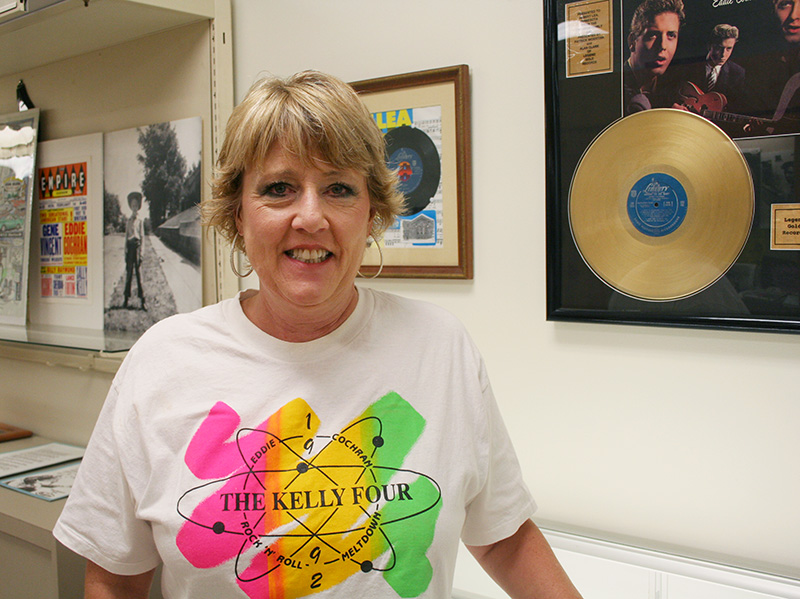 Shriver started his musical career as a young boy at his Catholic school. He wanted to play the harmonica but the loss of a stand-up bass player caused him to take a different path.

Music was important to Shriver through his whole life.

Shriver found his way into Cochran’s band after the previous bass player quit. Shriver fit right in with the band as the members were fans of playing music as well as practical jokes. Together they traveled around the country, said his former girlfriend, Sheryl Miner.

Cochran’s rising fame took him across the pond to England on tour, but the musician’s union would not allow Cochran to take his band with him. This act may have saved Shriver’s life, Miner said. On Easter 1960, Cochran was involved in an automobile accident that ended his life. Shriver was devastated by the loss of his best friend.

With his passion for music, Shriver kept playing. He played with Trini Lopez, The Rat Pack and even The Beatles. After many years of Hollywood, Shriver decided to leave and started a farm in Washington. He continued to play music but not for a living. He artificially inseminated cows for work.

Sometimes work got in the way of his music, but Shriver did not let it stop him, Miner said.

Once, when Shriver was on his way to play bass with the Symphony Orchestra in Portland, Oregon, Shriver made a quick stop at a farm and did his work while dressed in his concert attire.

It is stories like those that defined Shriver. Miner described him as a quirky, loving person who was always smiling.

Miner was born and raised in Centralia, Washington — a city between Seattle, Washington, and Portland, Oregon. She currently works in advertising at a radio station in Olympia, Washington. She is married to her husband, Greg, whom she married last September.

Miner and Shriver met in 2006. Miner went to a bicycle shop owned by Shriver for a tuneup. Having ridden her bike to the shop, Miner needed a ride home — which she got from Shriver. Later on, Shriver spotted Miner in a parking lot and invited her to go watch him play in one of the 14 musical groups he played with. The pair moved together in 2007 to Olympia, Washington. The couple lived happily together for six years.

“Dave said his job was to make me laugh every day, and he did,” Miner said.

In 2012, Shriver passed away after a seven-week long struggle with heart attacks and strokes. After having a stroke, Shriver was unable to read or speak well, but he was still able to play music.

Miner brought a ukulele he had recently purchased to the hospital one day and gave it to him to play, and to the surprise of everyone Shriver played beautiful music. After spending weeks in a nursing home, Miner brought Shriver home for dinner one night. After stepping into their home, Shriver went straight to his bass and began to play.

“Music was part of his soul,” Miner said.