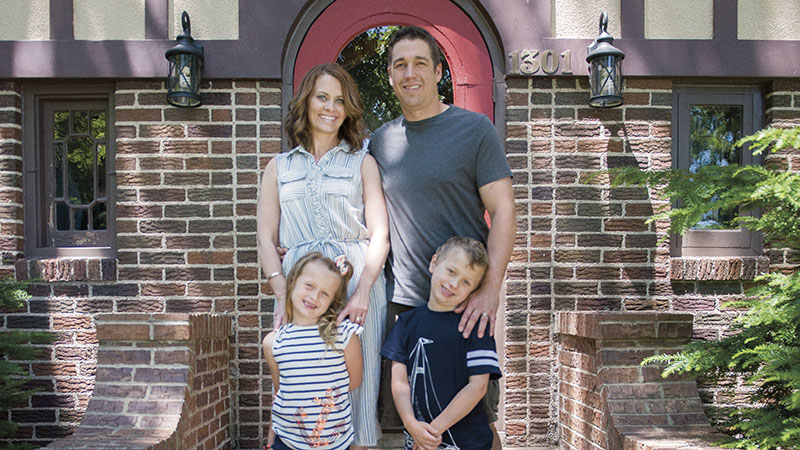 The Jacobsons have lived in their lakefront home for about 2 1/2 years. They family started Red Door Construction last fall, which they run out of their home. - Colleen Harrison/Albert Lea Tribune 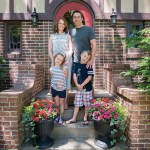 The Jacobsons have lived in their lakefront home for about 2 1/2 years. They family started Red Door Construction last fall, which they run out of their home. – Colleen Harrison/Albert Lea Tribune 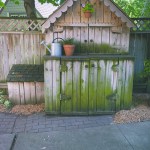 Another of Brooke Jacobson’s favorite features of the house is a flower-potting station in the backyard. – Colleen Harrison/Albert Lea Tribune 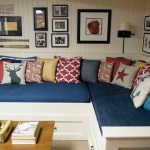 The Jacobsons custom-built a sectional in their basement that doubles as a guest bed. – Colleen Harrison/Albert Lea Tribune 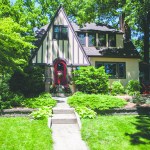 The Jacobsons named their business, Red Door Construction, after the red door of their home. – Colleen Harrison/Albert Lea Tribune 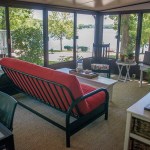 The home has a three-season screened-in porch with a front-and-center view of Fountain Lake. – Colleen Harrison/Albert Lea Tribune 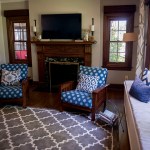 The woodwork and fireplace in the Jacobsons’ home are all original. – Colleen Harrison/Albert Lea Tribune 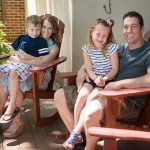 The Jacobsons recently added a deck onto the front of their home. -Colleen Harrison/Albert Lea Tribune

A cottage with a touch of nautical and farmhouse design.

That’s how Albert Lean Brooke Jacobson describes her home off of Fountain Lake.

The house, at 1301 Lakeview Boulevard, was originally built in 1934. Brooke Jacobson, and her husband, Jeremy, bought it about 2 1/2 years ago from Jane and Harvey Hofkamp, who had lived there for more than 40 years.

“I like older homes with lots of character, and this one is chock-full,” Brooke Jacobson said. “There isn’t another house like it in Albert Lea.”

The Jacobsons, who have two children — Nora, 6, and Charlie, 7 — said they had not originally planned to move to that neighborhood, but they fell in love with the home.

The Tudor-style house includes several original interior design elements, including the fireplace mantel, a set of french doors and the front door itself. Some of the other highlights include built-in-book shelves and a three-season porch.

After the couple purchased the house, they said they took off wallpaper and painted every room.

They pulled up carpet and restored the hardwood floors underneath in both the dining room and living room. They have also updated the flooring in the kitchen, built a custom sectional with trundle beds for the basement and freshened up some of the landscaping.

As a designer, Brooke Jacobson puts her own touch on the house. She said she often rearranges the house for a fresh feel and loves to decorate for the seasons.

In late May and early June, the couple took some bushes outside the front of the house and built a deck where they can now sit out and watch all of the happenings on and around the lake.

Jeremy Jacobson said while it is busy in front of the house with the vehicle and pedestrian traffic on Lakeview Boulevard and the boat traffic on Fountain Lake, he appreciates the opportunity for privacy in the backyard.

The backyard is enclosed by a wooden gate on all sides and features various seating areas, along with a potting station, landscaping and other amenities. There are also several trees nearby for shade.

The space is perfect for entertaining.

The couple said the house is a combination of them both, as Brooke Jacobson is a designer and her husband is more knowledgeable about carpentry.

“She’s the vision, and I’m the muscle,” Jeremy Jacobson said with a laugh.

Brooke Jacobson said their favorite thing to do is fix up homes, and they have dreamed of owning their own construction business for years.

With this passion, the couple opened Red Door Construction about a year ago. The business is named after the red door on the front of their house. The business operates out of their home and has one other employee besides themselves.

The new business does mainly residential work, but it has completed some commercial projects as well.

Brooke Jacobson said she likes working for her own company because she can stay at home with her children in the summer.

In the future, the couple said they have a few more projects in mind at their house. They would like to update the bathroom, the kitchen and a portion of the space behind the house. They are also contemplating opening up the kitchen and the dining room. 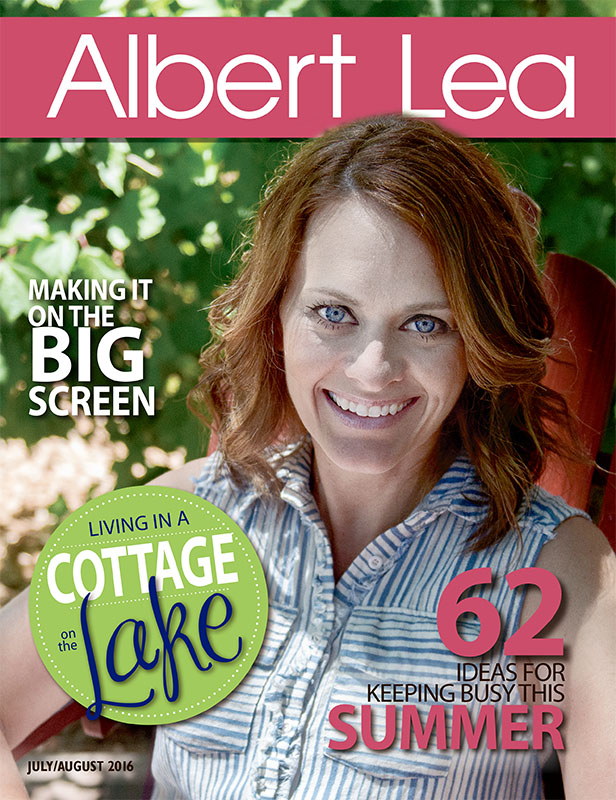 See this and other stories in the July/August issue of Albert Lea magazine.