Dennis C. Clausen was born Jan. 16, 1952, in Owatonna, the son of Sylvester and Dorothy (Wallace) Clausen.

He served his country in the United States Army in Germany from 1982 until his honorable discharge in 1984. Dennis worked for the Hollandale Marketing Association.

Dennis was very quiet and humble, but his caring nature was evident by his willingness to help anyone in need. 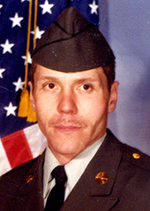 He will be missed by his daughter, Amanda, and her husband, Brandon Evans; grandchildren Ashlyn, Mallory, Kaylee and Shelby; brother,  David and his wife, Dorothy Clausen, of Texas; half-sisters Joann Peterson of Alden and Carol and her husband, Donald Jensen, of Bricelyn;  and many nieces and nephews.

He was preceded in death by his parents; sister, Darlene Clausen Fraser; brother, Gary Clausen; and half-brother,  Ronald “Butch” Clausen.

Friends may visit with family from 10 to 11 a.m.  Thursday at Bonnerup Funeral Service.  Graveside services with military honors will follow at Graceland Cemetery in Albert Lea.