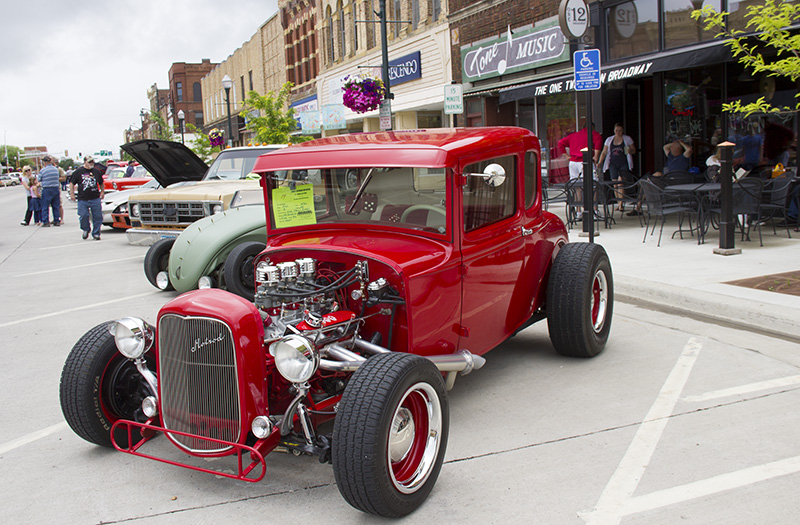 Originally started back in 1986, the weekend merged in 1991 with the car show. This year’s Eddie Cochran Weekend is expected to be one of the biggest yet.

Scheduled to start Friday night, the weekend will kick off with a cruise-in social at 4 p.m., which will last until 10 p.m. At Country Inn & Suites on Main Street, this event will include a free concert from Richie Lee & the Fabulous 50s. It is sponsored by Motor Inn Co., Green Mill and Country Inn & Suites.

On Saturday the main events will take place. Starting at 8 a.m., close to 200 cars from as early as the 1930s will line up downtown for a car show that will last until 2 p.m.

Following the car show, over 70 awards will be given out for the top 50 voted on by participants and the top 10 voted on by spectators.

A 12-mile car cruise will follow the awards ceremony, starting at the fairgrounds. Both events are free to attend for the public. 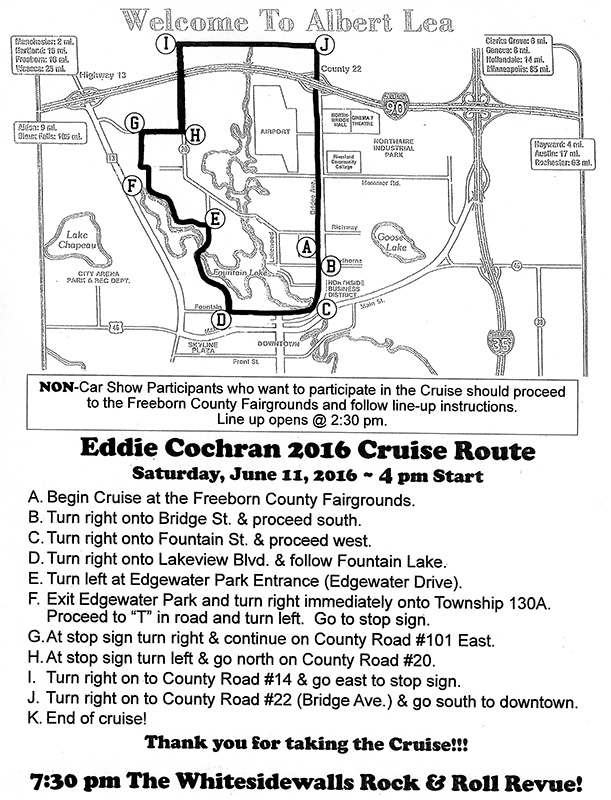 Eddie Cochran Weekend Chairman Jerry Monson is hoping for a huge turnout this year with participants from not only Minnesota, but also other states including Illinois and Oklahoma.

If you have a classic car you would like to enter in the car show or car cruise, you must pay the $10 registration fee between 8 and 11:30 a.m. Saturday outside the Albert Lea Convention and Visitors Bureau downtown. The fee includes a dash plaque and goodie bag.

The Freeborn County Historical Museum will be open from 10 a.m. to 4 p.m. Friday and Saturday with exhibits for both Eddie Cochran and Marion Ross.

The Eddie Cochran exhibit hosts a collection of all of Cochran’s possessions from a young age, until his death in 1960. Cochran is described by Monson as being “very ahead of his time.”

On Saturday, there will be a free shuttle bus transporting people from downtown to the museum and back between 11 a.m. and 2 p.m.

Richie Lee & the Fabulous 50s will perform at both 11:30 a.m. and 6:30 p.m. on Saturday at the Marion Ross Performing Arts Center, but these concerts require tickets — unlike the Friday performance).

Monson wanted to remind people that everything is free except for the Saturday performances by Richie Lee & the Fabulous 50s and the food.

Food will be available throughout the weekend and includes Bruno’s, Klassic Kitchens and the Signature Supper Club, among others.

Fifties-themed window decorating contests will last from Monday through Saturday. An award for first place will be given out by the museum.

To close the weekend, there will a free, lakeside concert and street dance at 7:30 p.m. on Saturday, performed by the Whitsidewalls at Fountain Lake Park.

A rock ’n’ roll worship service will begin at 10 a.m. Sunday at United Methodist Church. Sixty-five years ago, then 14-year-old Cochran was confirmed in faith at First Methodist Church on West College Street in Albert Lea.

The service uses many well-known hits from the ’50s, with lyrics changed by permission to make them appropriate for worship.

Lunch will be available in the social hall following the worship service. Poodle skirts and classic cars are welcome.