Funeral services for Erlis M. Sime will be at 1 p.m. Tuesday at the Bonnerup Funeral Service chapel, Albert Lea. The Rev. Janet White will officiate. Visitation will take place one hour prior to the service. Interment will be in St. Theodore Catholic Cemetery in Albert Lea.

Erlis passed away surrounded in the presence of family on Thursday, June 23, 2016, at Thorne Crest Senior Living Community in Albert Lea. She was 87.

Erlis (Meyers) was born Aug. 13, 1928, the daughter of Edwin and Vivian (Jensen) Meyers. She graduated from Albert Lea High School in 1946. She worked as a secretary for Wilson and Co., where she would meet her husband. 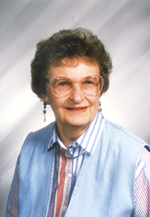 She married Richard Kennelly in October 1949. Erlis enjoyed being a stay-at-home mom and volunteered in various child and school activities. After a variety of part-time employment, she worked full time with the Freeborn County Department of Human Services and worked with daycares to get them licensed, which she took great pride in.

Her first husband, Richard, passed away in 1977. Erlis was united in marriage to Wayne Sime in December 1982. The couple enjoyed touring the U.S. including a month-long drive through Alaska. During their travels they made many visits to their children out west and south.

Wayne later retired from farming and they moved into Albert Lea. After Erlis retired in 1990, she spent time with her parents in their later years. They sorted through pictures, collecting and recording family history into albums. Other hobbies included square dancing, polka dancing, flower gardening, coffee and lunch dates with friends, and — again — volunteering in the community. She also collected antique head vases, a collection amassing 50 to 60. She was also the leader of an exercise class called Bone Builders at her residence at Village Cooperative.

Erlis can be described as a friend to everyone. She always put others before herself. She did everything in her power to make other people’s lives better, and put great thought into finding a solution to anyone’s troubles. Most of all, she looked forward to her visits with her children, grandchildren and great-grandchildren.

She is preceded in death by both parents; husband, Richard P. Kennelly; and second husband, Wayne W. Sime.