A fourth candidate has filed for election for the 1st Ward seat on the Albert Lea City Council.

Kamrath said by being a councilor he can be a problem solver instead of complaining about the city’s policies, noting he is very concerned with the direction the city is taking on several issues, such as supporting the Shell Rock River Watershed District’s request to extend its half-cent sales tax. 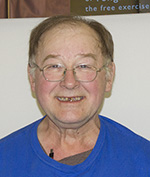 “I don’t want that,” he said, noting he supports a scaled-back version of the district’s request.

He claimed he is a traveler, noting wherever he goes he brags about Albert Lea being the first community awarded Blue Zones certification. He said he has given Blue Zones T-shirts to national politicians such as Mike Huckabee, Jeb Bush and Marco Rubio.

A longtime Albert Lea German and English teacher who retired more than 10 years ago, Kamrath said he is interested in the financial benefits of the position, and noted he wants to have a say in how his tax dollars are spent.

Kamrath said he wants city officials to use tax dollars more effectively and efficiently, and he wants the city to provide proper notice before materials are removed in front of a house.

Other problems include a downtown parking lot maintenance fee that he wants to eliminate, noting he has fought against the fee for years. He said he is displeased with money the city has spent on different remodeling projects of City Hall.

A regular attendee at City Council meetings, he said he does not like the council limiting members of the public to three minutes and one topic at public forums during the council’s meetings. He would like the time expanded to five minutes about any topics.

He said he has a lot of time to devote himself to the problems of constituents and described himself as extremely interested in politics.

He said he received his bachelor’s and master’s degrees from Minnesota State University, Mankato.

Kamrath is facing Craig Havener, George Gillespie and Rich Murray for the seat.