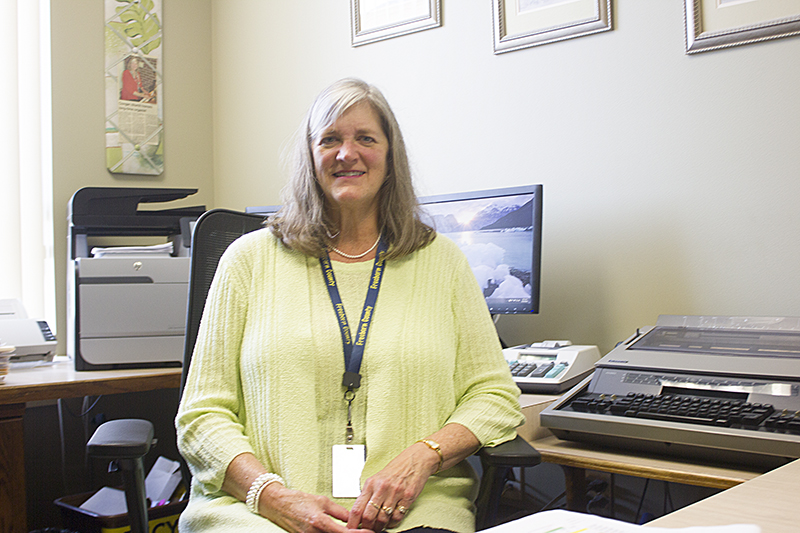 Debra Mortensen will retire Friday after a four-decade career in the Freeborn County Sheriff’s Office that she deems a success. - Sam Wilmes/Albert Lea Tribune

An Albert Lea woman and secretary in the Freeborn County Sheriff’s Office will retire Friday after a four-decade career.

Debra Mortensen, 58, started at the Sheriff’s Office as a clerk and typist in June 1976, a week after she graduated from Alden-Conger High School.

“I have been blessed,” Mortensen said.

She said she chose the Sheriff’s Office position out of three job offers she received, and doesn’t regret her choice.

“I guess I picked the right job,” Mortensen said.

Mortensen became a personal secretary to the sheriff in 1980 and has since served as secretary for five sheriffs, including Holland Laak, Donald Nolander Jr., Mark Harig, Bob Kindler and Kurt Freitag.

“I’ve enjoyed my career and it has been an honor and privilege to serve as secretary for five sheriffs,” she said. “May God bless my law enforcement family and keep them safe.”

She said she is excited and sad about retiring, noting that though she will not miss deadlines or waking up to an alarm clock, she will miss her law enforcement family and other friends in county offices after she retires.

Mortensen has been married to Ben — a detective at the Albert Lea Police Department — for 29 years.

Freitag said Mortensen has brought reliability, punctuality, professionalism and a positive attitude to the Sheriff’s Office, noting he thinks she has been vital to the department.

“We wouldn’t function without Deb doing her job,” he said. “We truly could not.”

Mortensen has been an organist at St. Paul Lutheran Church in Conger for 46 years and serves as financial secretary of the parish’s worship committee.

In retirement, Mortensen hopes to spend more time with her nieces and nephews, play piano once a week at Mayo Clinic Health System in Albert Lea and stay involved with church activities.

The public is invited to attend a retirement party for Mortensen from 2 to 4 p.m. Thursday in the Freeborn Room at the Freeborn County Government Center. Refreshments and snacks will be served. A retirement open house will be from 7 to 10 p.m. July 15 at Wedgewood Cove.

Mortensen said she will look at her career as a success.