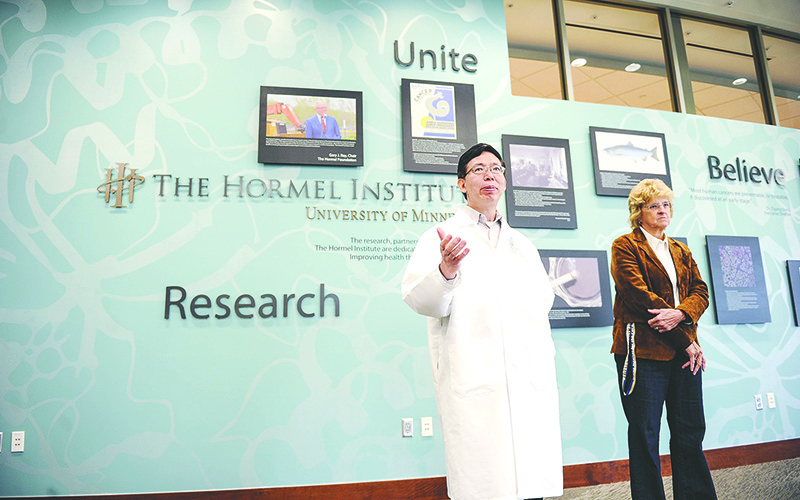 Dr. Zigang Dong talks about what the new additions to The Hormel Institute will bring to the institute itself and the city of Austin. - Eric Johnson/Albert Lea Tribune

Hundreds of leaders from around the globe gave a standing ovation Wednesday to a sign of what cancer research can accomplish.

Eight years after she took the stage as a child to speak at the grand opening of The Hormel Institute’s 2008 expansion, Abby Bauleke again took the stage to speak of the importance of cancer research as The Institute unveiled its latest expansion.

“More research is the next step,” said Bauleke, who’s been cancer free 10 years. “Today’s research is tomorrow’s cure, and there is nothing more important than that.”

But much work is still to be done, Bauleke noted, and much of that work will come in Austin.

Hundreds gathered Wednesday to usher in a new era of cancer-fighting as The Hormel Institute, University of Minnesota unveiled its 20-lab expansion and the Ray Live Learning Center during a grand opening ceremony with leaders from across the community, state and world.

“This is a historic moment for us at The Hormel Institute and all research communities,” Institute Executive Director Dr. Zigang Dong said.

Dong said the expansion will accelerate cancer research and detection.

“All of this is because of you,” he said. “Thank you very much.”

The Institute’s two-year building project more than doubles the size of the cancer research center by adding 20 labs, the Ray Live Learning Center, a global communications theater, and more new technology after an expansion tripled the cancer center in 2008.

“The Institute has come a long way since that 400-square-foot lab in a horse stable back in 1942,” Klobuchar said.

The expansion allows space for another 120 to 130 faculty and staff to be added over the next few years.

“In the last 10 years because of the success of the Hormel company and also our investments at The Foundation, we have been able to support this Institute to the tune of over $80 million,” Ray said.

“We are extremely grateful for their support, which allows 100 percent of every dollar that we raise to be donated to research at The Hormel Institute,” she said.

But many partners were involved.

Several speakers, including University of Minnesota President Eric Kaler, touted the many partnerships behind The Institute’s expansion, both in the U.S. and with the leaders in China. Klobuchar echoed that sentiment.

“It’s just a team effort when you look at this incredible work that’s been done,” she said

The Institute is a sign of private and public dollars — from both state and federal sources — coming together to fight cancers.

The Hormel Institute’s expansion launched in 2012 with $13.5 million awarded in the Minnesota bonding bill. The Austin Port Authority, through state Sen. Dan Sparks and state Rep. Jeanne Poppe, both DFL-Austin, requested the funds for 20 new labs. Supported across the board by most state legislators including state Sens. David Senjem and Carla Nelson, The Hormel Foundation matched the $13.5 million bonding grant and gave an additional $8 million in support of recruiting top faculty to fill the new labs and provide new technology.

Sparks recalled hearing Knowlton talk about future plans, which at the time called to triple the facility by 2008, and he remembers being floored and proud that it could happen in Austin. He still felt that pride Wednesday.

“This is truly a proud day for all of us,” Sparks said.

Poppe described the process as a relay with countless people around community, state and country working to secure the funding and support for the project. Now the baton is being passed from politicians and construction teams to the researchers.

“I’m proud to be part of the team to pass it on to the scientists,” she said.

Klobuchar, who praised The Institute for adding a football field worth of research space, spoke of more federal help as the National Cancer Institute received $260 million more than last year the and National Institutes of Health received $2 billion more.

She praised the Hormel family as ahead of its time in working to fight cancer.

“This is our moonshot,” Rietz read from Biden’s letter. “I know with your help we can secure a genuine global commitment to end cancer as we know it and inspire a new generation of scientists to pursue new discoveries. We need to stop talking and start doing. The Hormel Institute has been doing just that for more than 70 years.”

U.S. Rep. Tim Walz, DFL-Minn., said the scourge of cancer is one of the few universal things that bind the world together.

Walz told the story of holding his brother’s hand one January day many years ago when they buried their father after he died of lung cancer. But it’s not just a Minnesota problem or even the U.S.

“There’s not one of us in here that doesn’t have that story,” he said.

Several scientists from China were present for Wednesday’s ceremony and for China-U.S. Forum on Frontiers of Cancer Research and the fourth Hormel Institute International Cancer Research Conference in the Ray Live Learning Center.

That’s not to mention the many countries represented by Institute scientists.

Walz said that collaboration is key and the Minnesotan thing to do in bringing in partners from China.

While Klobuchar and Walz both noted cancer won’t be cured overnight, they praised The Institute for leading the charge and said they look forward to one day celebrating a cure.

“This is a joyous day,” Walz said. “But this is a means to an end, and there’s no one in this room who’s going to be daunted until that story is written, and it will be written, on how the human races defeated cancer and improved the quality of life for literally billions. And that story will run right through Austin.”

While The Institute represents a global fight against cancer, several spoke of its benefits to Austin.

Ray spoke of what The Institute means for Austin’s economy and how it attracts an educated workforce, helps strengthen schools, and provides a strong career path and goals for students.

The Institute’s work, he noted, will tie in with the work of groups like Vision 2020 that aim to make Austin better, noting great cities don’t happen by accident — they take determination and a unified approach.

He described this as an example that Austin is a forward-looking community from a technology standpoint.

Wednesday’s grand opening was just the beginning. Over the next three to five years, The Institute is expected to hire an additional 15 section leaders, which will make for about 130 new faculty and staff.

Already, The Institute has already interviewed more than 150 applicants to fill the new labs, and leaders are planning additional Skype interviews with the top candidates. The finalists will visit The Institute for a face-to-face interview and will give a seminar on their research.

“It’s quite a process,” Bode said. “It takes quite a while, and once we make a decision and they accept, some investigators can more their laboratory in a few months; some take much longer to do that depending on how big they are.”