Justin Forrest Rush, 33, reportedly had more than 30 grams of the drug at Harmony Park Saturday evening.

According to court documents, Freeborn County Sheriff’s Office deputies were patrolling the area when they were alerted by a security guard that Rush was trying to get into Harmony Park with a bag that he would not allow them to search. 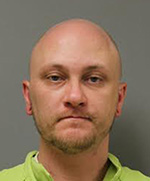 The security guard said Rush stated he had cocaine in the bag.

Rush reportedly also told a deputy that he had cocaine in the bag and showed a Tupperware container with several bags containing a white powdery substance.

Rush’s next court appearance is June 9.

First-degree cocaine possession carries a maximum sentence of 30 years in prison and a $1 million fine.