Funeral services for Jeremy C. Jensen of Albert Lea will be at 1:30 p.m. Thursday at Bonnerup Funeral Service in  Albert Lea.  The Rev. Joshua Enderson will officiate. Interment will be in Oakwood Cemetery in Austin. Visitation will be at from 11:30 a.m. until the time of the service. 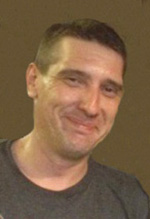 He affectionately became known as “Snaps” to his friends.  He graduated from Albert Lea High School and then began working in the printing industry at various places. Most recently he worked at Church Offset Printing in Albert Lea and then at Quad Graphics in Waseca.

One of Jeremy’s favorite pastimes was traveling to the Jensen family cabin on Turtle River, where he acquired his passion for fishing. He enjoyed hunting in earlier years and later in life enjoyed tinkering with his car and playing in a pool league. He enjoyed time spent with family and friends hanging out in the garage or on his boat.

Jeremy will be missed by his family: mother, Kathy Jensen, of Albert Lea; sister, Janelle (Mike) Oothoudt, of Albert Lea; uncle, Mark (Sheila) Jensen, of Albert Lea and their family Amanda (Tom) Mensink and children Brandon and Madison, Sarah Jensen of Albert Lea and Jared Jensen of Minnetonka; uncle, LaDean (Doreen) McCall, of Princeton  and their family Macy (Aaron) Sandnas and children Gavin and Ava of Hibbing, Crystal McCall and Mason McCall of Alpine, California, Holly Johnson of Minneapolis, Rachel Johnson of Minneapolis and Emily and Olivia McCall of Princeton; aunt, Karen Snodgrass, of St. George, Utah, and her son, Gabriel Snodgrass; and many special friends.

He was preceded in death by his father, Donald Jensen; grandparents Norman and Lois Jensen and Wallace and Vivian McCall; and great-grandparents Edwin and Frieda Fuller.

Jeremy will be remembered for his quiet demeanor and ever present quick wit. He will be truly missed.