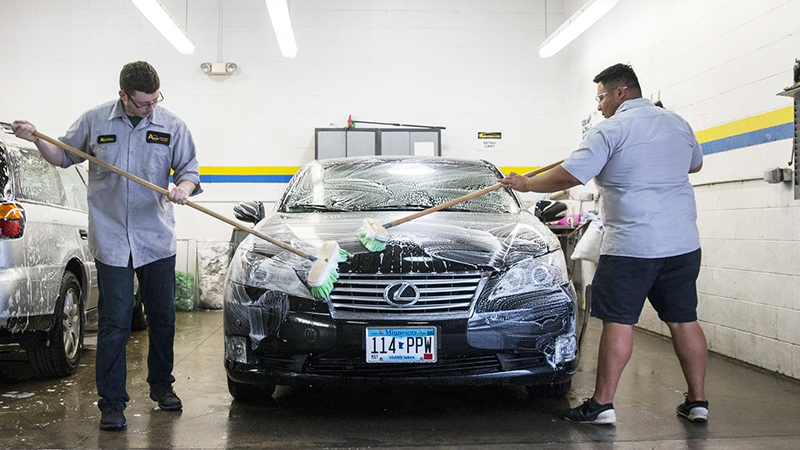 Abra Auto Body is worried about securing a steady supply of repair technicians for its 340 or so shops around the country. Employees Nicholas Hoover, left, and Elvis Thao wash a Lexus before it leaves the Brooklyn Park shop on Friday. — Evan Frost/MPR News

After graduating from the University of St. Thomas, Joe Novitzki landed a gig selling medical devices early in his job hunt.

“For myself and my friends who are also from the area, I think it’s been pretty easy find jobs,” he said.

The job market seems to be improving in Minnesota, at least for people like Novitzki. The state’s unemployment rate is about at pre-recession levels and the average wage for private-sector jobs has been growing at a healthy clip.

But if times are good for workers, it means many employers are struggling to find people. They’re not only spending more on wages — employers are turning to other strategies to procure the skills they need.

Minnesota Department of Employment and Economic Development economist Steve Hine said a rise in average private sector wages is an especially telling indication of a tightening labor market. And many unskilled jobs are paying more than the state’s $9-an-hour minimum wage.

Abra Auto Body is worried about securing a steady supply of repair technicians for its 340 or so shops around the country, including one in the company’s home town of Brooklyn Park.

The company is already paying a $2,500 bounty to anyone who refers a qualified technician. And next month the company is offering free on-the-job training.

David Kuhl, Abra’s chief people officer, said the auto body repair industry will need more than 100,000 workers in the next decade to replace retirees. And he said the jobs are more desirable than many might think.

“Although it is a blue collar job, it is highly technical, highly skilled,” he said. “You’re using computers and using very sophisticated technology to really make cars beautiful again.

And Kuhl said the company’s techs pull down $80,000 a year on average.

Other blue-collar jobs, such as carpentry and construction, are on the rebound, too.

“Hence the reason we have increased our wage averages and benefit package to try to attract some of those that might change their mind and maybe want try this industry,” he said.

Not every worker is feeling flush, though.

A Federal Reserve survey found that about a third of adults said they were struggling or just getting by last year. But the survey also found more people with a sense of financial well-being — not only in total, but across income and education levels.

In the white-collar world, workers with valued accounting, finance, information technology and other skills are frequently finding many suitors.

Kathy Northamer, a district director with the Robert Half recruitment firm, said her company is seeing candidates with multiple job offers.

“At the same time, they use offers to play off of other offers, so better work-life balance here, more vacation there,” she said.

Companies have to be more careful not to take valued employees for granted and keep wages and benefits competitive.

“It’s a good time to be a job seeker. It’s a really good market for people who are maybe looking to make a move,” said Carrie Patton, board president for the Twin Cities Human Resources Association.

Employers are even taking more interest in English majors and other liberal arts graduates.

Paul Timmins, director of career services at the University of Minnesota’s College of Liberal Arts, said he feels like the labor market is still getting better.

“There are times where employers just aren’t hiring as much. They don’t come to the job fairs,” he said. “But we’ve seen record attendance in the last couple of years in terms of employers attending all of our big job fairs. Both for CLA and for the University of Minnesota system-wide.”