A Mass of Christian burial will be at 10:30 a.m. Friday at St. Mary’s Catholic Church in Vinton. The Rev. Ardel Barta will officiate. Visitation will be from 5 to 7 p.m. Thursday at 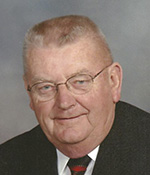 Phillips Funeral Home Chapel, 212 E. Sixth St. in Vinton, where a scripture service will be at 4:45 p.m. and one hour prior to services Friday at the church. Interment will be in St. Mary’s Catholic Cemetery in Vinton with graveside military rites conducted by Geo. G. Luckey American Legion Post No. 57 and Iowa military funeral honors. A memorial fund has been established.

Kenneth was born March 4, 1931, in Worth County, to Arthur N. and Cora O. (Johnson) Troe. Ken graduated from high school and served his nation in the United States Army during Korea. He was united in marriage to Bonnie M. Dirksen on May 25, 1957, at St. Theodore Catholic Church in Albert Lea.

In his leisure, Ken enjoyed golfing, playing cards and spending time with his family and friends.

In addition to his wife of 59 years, Bonnie, Ken is survived by his children Steven Troe of Key West, Florida, Karen (Alan) Hummel of North Oaks, William (Ann) Troe of Omaha, Nebraska, David (Terri) Troe of Boone, Barbara (Joe) Geiger of Lone Tree and Lisa (Danny) Badger of Newton; 13 grandchildren; three great-grandchildren; his brother, Arnold Troe, of Emmons; his sister, Violet Kvale, of Lake Mills; and his brothers-in-law, Mike and Lisa Dirksen of Owatana and Dan and Mina Dirksen of Ohio.

He was preceded in death by his parents; his sister, Ruth Leonhardi; three brothers-in-law and four sisters-in-law.

Online condolences may be left at www.phillipsfuneralhomes.com.