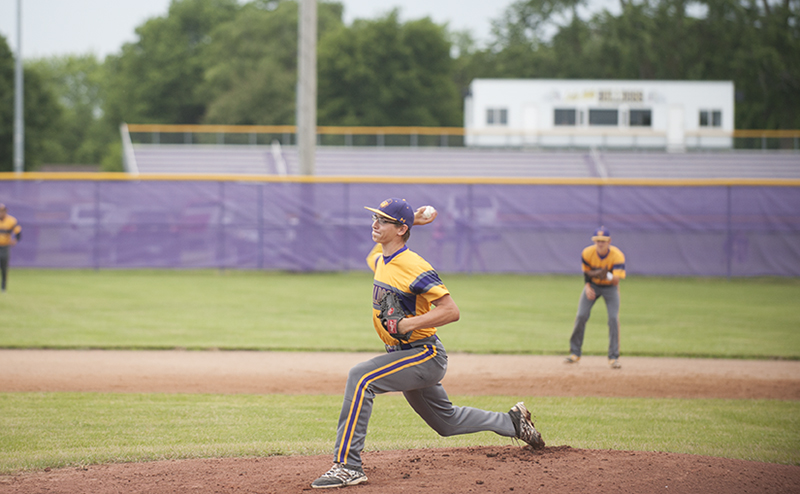 Lake Mills pitcher Grant Boehmer delivers a pitch in the first inning during Friday’s game against Bishop Garrigan. Boehmer lasted 3.1 innings and walked six batters. He helped himself at the plate by collecting two hits, driving in a run and scoring a run. Jarrod Peterson/Albert Lea Tribune

LAKE MILLS — The Lake Mills Bulldogs had scored 32 runs over their past two games, while allowing just 10 runs. They won both of those games.

Friday was a different story, though, as a tough Bishop Garrigan team came to town.

The Bears got to Bulldogs pitcher Grant Boehmer in the first inning, putting up five runs.

The Bulldogs were able to battle back, but couldn’t keep pace with the Bears, losing 15-7.

Boehmer was missing his spots early, and the Bears made him pay.

He walked the first batter, then gave up a single. Zach Boelter drove in two runs with a single.

After another single and walk, a run scored on a wild pitch and a sac fly. The Bears added one more run in the inning when Drake Buscherfeld smacked an RBI single.

However, Boehmer ended the first inning with a little confidence-booster. He struck out the Bears for the final two outs.

The Bulldogs started the inning with back-to-back singles by Charlie Dugger and Gabe Irons. Slade Sifuentes, coming off a 5-RBI game on Thursday, walked to load the bases.

The Bulldogs scored their first run on an error. Luke Groe drove in a run on a groundout to make it 5-2. Then, Boehmer helped himself out when he ripped an RBI single to cut the deficit to two runs.

In the top of the second inning, the Bears tacked on two runs, as both runs came across on wild pitches.

Boehmer settled down in the third inning, as he faced just four batters.

In the bottom half of the inning, Lake Mills tied it up.

The inning started with a popout. Boehmer singled, Grant Fjelstad walked, followed by another pop out.

With two outs, Cael Boehmer walked to load the bases. The lefty Dugger got a pitch he could handle and drove in two runs with a sharp single.

That would be as close as the Bulldogs would get to taking the lead, though, and as many runs as they would score.

The loss drops the Bulldogs to 9-6 on the season.

They will be on the road to face Osage Monday.