Lake Mills man gets probation in case of promoting prostitution

A Lake Mills man who pleaded guilty in April to promoting prostitution at a Rochester hotel was placed on probation for 15 years Monday in Olmsted County District Court.

Michael Alan Gardner, 40, was given a stayed sentence of four years in prison. He was sentenced to 16 days in jail and was given credit for 16 days served. 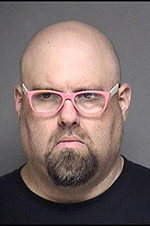 Gardner was arrested in February after an undercover officer with the Rochester Police Department responded to an online advertisement for a 22-year-old woman offering sexual services.

Gardner was reportedly found in the parking lot responding by phone to the men who wanted to set up appointments from the ad. The woman reportedly told police she had been dropped off at the hotel by Gardner, who controlled the phone attached to her ad.

Gardner was found with a container of methamphetamine in his pocket.