Leading into the future 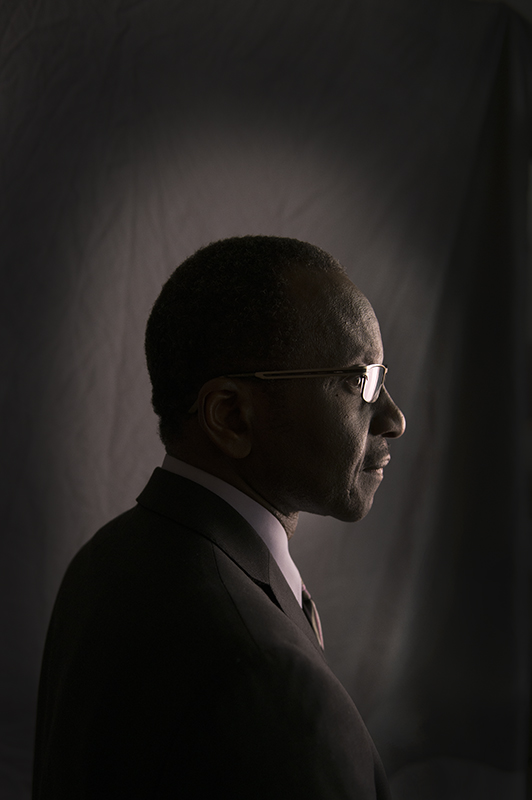 With an indisputable passion for education, Riverland Community College President Adenuga Atewologun has begun to change the face of community college in Albert Lea, Austin and Owatonna. The Tribune sat down with Atewologun to see what led him to this point in his career.

Q: Could you provide some background on what you did before you came to Riverland?

A: “I grew up in Nigeria. That’s where I got my bachelor’s degree, my first degree, in agricultural engineering. Then I wanted to study in-depth the storage and design of silos, tall cylindrical buildings for grains, and that took me to Illinois, Urbana-Champaign, in southern Illinois. I did my master’s and doctorate there, studying the structural components of the design of those large buildings. I used things like soybeans and corn as my model grains.

“Then after that, I was supposed to go back home because I was on a scholarship. Things changed in Nigeria somewhat — military coup — so my professors there said, ‘Well why don’t you stay here for about three years — stay in the U.S. — and then things could settle down and you come back.’

“I looked for a job while I was finishing my doctoral work part time, and that’s what led me to community college teaching.

“I started adjunct teaching work at a community college in the university town there, and I had a ball. I really enjoyed teaching a different group of students who are good academically, but they needed a little bit of more assistance than a typical top 10 percent of your students. They are probably first generation students. They are minorities. Some of them are just very talented students that never really got their bearings. I enjoyed teaching those groups of students. … I thought I was destined for research — I thought I was going to do that — but then that adjunct teaching led me to seek a full-time position at College of DuPage in a Chicago suburb. … That’s where I started teaching physics and engineering. I did that for about 10 years. I thought, ‘Well, I was enjoying this, but let’s try something different. Let’s mix the classroom teaching with administration. That began my journey in administration.

“I became associate dean. I was a dean for a total of about 10 years, but I went for a special fellowship program … to develop me more for executive. That perhaps was a turning point in exposing me to how much influence you could have as an administrator. In the classroom you did very wonderful things talking to a few things and making differences in students lives, but as an administrator, it’s a delayed impact but a wider impact. …

“I went to a smaller college in southern Illinois, a suburb of Chicago. I was a vp of academic affairs, dean of faculty four years before I came to Riverland. Being at Riverland as a president is my first presidency and it will be the last one. I’ve rather enjoyed being a part of the community — making such a big difference in the lives of students and community.”

Q: What attracted you to Riverland?

A: “Geography really wasn’t an issue. I wanted a place where there was enough opportunity to do something impactful and get a chance to really direct the future or improve the current condition of an institution. … At that time I was looking at a few other places. It just happened that Riverland in Albert Lea, Austin and Owatonna — I liked the smallness of it compared to really large urban-type institution where I had another offer, but I thought this would be a better fit for me. It was not as easy for my wife to transition, but she and I both came several times, and she thought we could make it work. We have enjoyed the past two and a half years.”

Q: Do you live in Austin?

Q: What’s been the thing you’re most proud of so far?

A: “The first thing is getting a strategic plan and doing that very quickly. It took about six months to understand the culture and then we put together a good strategic plan. We came up with what I consider a best-in-class strategic plan. It goes until 2020. … We are very very hopeful we’re going to achieve the objectives in it.

“The second one is what I’ve been able to achieve with my leadership team. It is not just me doing the work. It is a collection of dedicated employees, supportive community leaders. Building a coalition that involves employees of the college, the community leaders, business partners.” 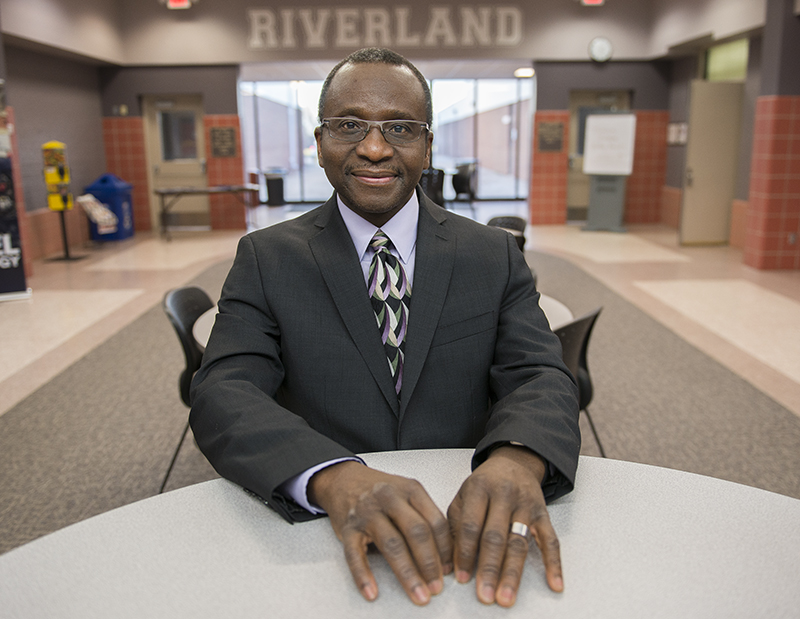 Atewologun lives in Austin with his wife, but jokingly said they claim residency in Austin, Albert Lea and Owatonna — where Riverland Community College’s campuses are located. – Colleen Harrison/Albert Lea Tribune

Q: What are the goals that you have for the next five years?

A: “One is to build campuses with distinctiveness. I call them identities, or campus distinctiveness. In other words, when we think of the Albert Lea campus, what do we do really well that Albert Lea can say, “Oh, Albert Lea’s known for transportation, auto, truck driving, industrial technologies, manufacturing and trade programs. Austin is known for certain things that’s all part of our strategic vision. We’ve been known for transfer programs like the Associate of Arts, Associate of Science, theater, Associate in Fine Arts. It’s the home of the allied health nursing program. Then in Owatonna we have business and additive manufacturing center.

“Our second goal is to improve the aesthetics of the college. So we’ve been doing some campus beautification.

“We want people to feel that this is really a place that they can be happy to work, come to school and be a part of the community service that we render.

“Another goal is to increase enrollment. We’ve had a declining enrollment. The trend has been downward since 2010. Generally for community and technical colleges, enrollment and unemployment are counter-interactive. As the employment picture looks better, the enrollment goes down. We want to try to help students understand that they don’t have to delay acquiring the necessary technical education, civic skills that they need to thrive as a citizen of our region.

“Finally, it is to encourage the entrepreneurial spirit that is so important to the economic vitality of Greater Minnesota. We’re doing things to encourage startups.”

Q: This is not work-related, but what do you like to do for fun?

Q: How many children do you have? How old are they now?

Q: Is your extended family still in Nigeria?

A: “I have three brothers in the U.S. I have three other brothers in Nigeria. I have a sister in UK — United Kingdom. We’ve kind of branched out. I have several nephews and nieces abroad and here. I have a nephew in Minneapolis. In fact, if you were to Google the last name, I think there are more of us in Minneapolis than anywhere else around.

“My parents are deceased, but I have a large family back home, too. My dad had 13 of us, and my mom had six. I am the last of her six — of my mom’s six. My dad’s 13 included my mom’s six. I have six other half brothers and sisters. I’m smack in the middle. I’m No. 7. I always say, I’m both the oldest and the youngest.”

A: “Some of my favorite are actually fish. I like to cook fish, and I also like to make rice and beans. Then there’s a special delicacy from Nigeria called moinmoin. It’s made from black-eyed peas.”

Q: Is there anything else you would like to mention?

A: “We are one of a handful of two-year colleges that has an accredited business program. Our online instruction is top notch. Our online enrollment is growing. We have some really cool programs like wind turbine technology. We are building on our strengths. We know we cannot be everything to everybody but when we know we have a niche we like to build on those things. Our criminal justice program is top notch. Then we’re working on our agriculture, food science, innovation center.

“It’s a great place to be, a great school to come.”

12 – Siblings or half siblings of Atewologun

“I wanted a place where there was enough opportunity to do something impactful and get a chance to really direct the future or improve the current condition of an institution.”