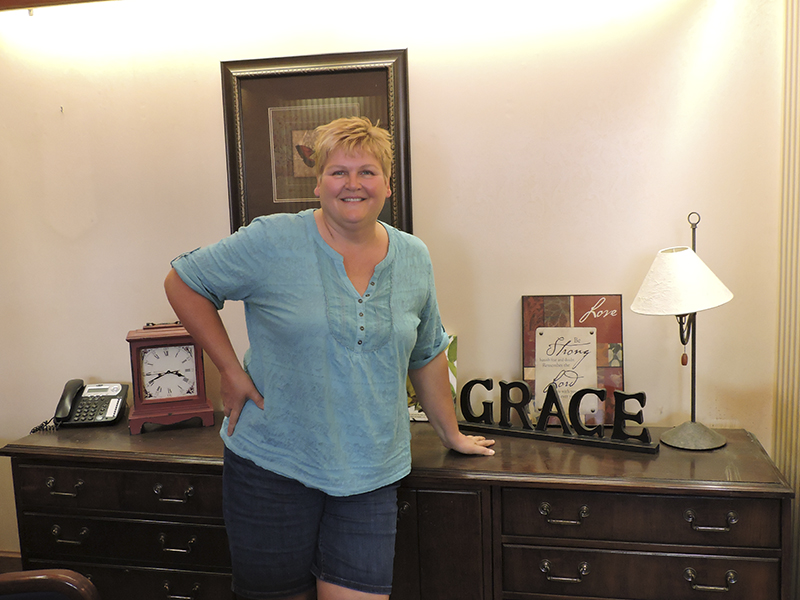 Tracy Muhlenbeck of Wells is in the process of opening a women's crisis center called The Better Way at 132 S. Broadway in Wells. - Kelly Wassenberg/Albert Lea Tribune

WELLS — Wells resident Tracy Muhlenbeck said a Bible verse saved her life during her own personal time of crisis.

“For I know the plans I have for you,” declares the Lord, “plans to prosper you and not to harm you, plans to give you a hope and a future.” — Jeremiah 29:11

It was a time in her life when she wasn’t happy. She was stressed to the point of feeling as if she was constantly juggling glass balls and one false move could lead to a catastrophe. It was a feeling she said left her when she placed her faith in the plans God had for her.

Since that time, Muhlenbeck said the Lord has given her a dream to help other women in crisis  through confidential, Christ-centered advocacy. On May 31 she took a leap forward to seeing that dream through to fruition when she acquired a building in downtown Wells. She has named the building the Five Sisters Project and it will house her newly-formed nonprofit organization.

“The name the Lord gave me for the 501c3 nonprofit corporation is The Better Way,” Muhlenbeck said. “It’s not because I think I have a better way. It’s because God has a better way for us.”

The mission statement for her group is to offer help, healing and hope to women in crisis and the definition of the term crisis can be as unique as the women seeking her help, she said.

“Crisis is very personal,” Muhlenbeck said. “You don’t know what it’s going to look like until it happens to you.”

Examples could be marital problems, domestic violence, unplanned pregnancy or a countless number of other things, according to Muhlenbeck.

“If what is happening in your life feels like a crisis to you, come in,” she said. “Let’s talk about it and see if we can figure out something we can do to help you.”

Along with advocacy, Muhlenbeck also plans to provide resources, referrals and temporary transitional housing. She said that many times when people are in a crisis situation, such as domestic violence, they cannot be looking things up on the internet or calling people to ask for help. The Better Way would allow those women to have a safe place to get away where someone could help them do those sorts of things, she said.

In addition, Muhlenbeck wants to play an active role in combatting sex trafficking. She wants to educate people in the community of what sex trafficking looks like so they know what to look for and can report it. While sex trafficking isn’t a problem that is necessarily in Wells, she said it can be found in nearby areas and is more widespread than people seem to think.

“The intersection of (Interstate 35) and (Interstate 90) is one of the highest sex trafficking places in the nation,” Muhlenbeck said. “Not just in Minnesota, but the nation.”

It is her goal to be able to make arrangements for victims of sex trafficking to have a safe house to go to, and she said that space could also be used for other women who need to be extracted from dangerous environments.

Muhlenbeck was quick to point out, however, that she will not be providing counseling services.

“I have no certifications, but I care and I’m willing and that’s what it takes,” she said.

There are many ways those in the area can help Muhlenbeck achieve her goal.

“What I really want more than anything is for people to start with the priority of prayer,” she said.

Muhlenbeck is also looking for volunteers. The building she has purchased will need some remodeling done to it so it can serve its intended purpose. She could use assistance with the work and donations to help offset the costs of the project. The organization could also use those familiar with donations management, prayer team leaders and ministry, among other things. Financial donations are also needed and can be written out to The Better Way, P.O. Box 203, Wells, MN 56097. Donations are tax deductible.

Muhlenbeck has already fully committed herself to her new nonprofit. She has given notice to the dental office in Mankato that she served as an office manager for. As of mid-July she will work at The Better Way full time and is already offering to help those who need assistance. The number to The Better Way is her personal cellphone number, 507-380-3365. She encouraged those who need help to reach out to her at any time. She doesn’t want anyone to feel like they have to handle a crisis alone while she works toward officially opening the facility, but Muhlenbeck is certain things will go as the Lord plans, she said.

“He said that he would give me everything I need,” she said. “Really I just need that stuff to shake loose now. Like snow on the mountain, it will melt at the right time to provide what I need and I believe that.”